The Earth’s continents move as new ocean crust rises to the surface along mid-ocean ridges or sinks under deep-ocean trenches. Beneath this crust lies the Earth’s mantle, where huge convection cells are constantly in motion. In these cells, hotter material rises up while cooler regions sink back down. This convection pushes and pulls at Earth’s surface like the currents in a pot of boiling water. Recent research has revealed ways to separate this “dynamic topography” effect from other geologic processes.

Some of the effects are stunning. The western United States, the Scottish Highlands, and the fjords of Norway all owe their elevation to mantle upwelling. At the Applied Geodynamics Laboratory, we study the impact of dynamic topography. Subtle tilts have profound consequences. A half-degree increase in slope (less than the tilt of a football field!) can cause salt to flow, trigger extensive shelf-margin submarine landslides, and cause large volumes of sand and mud to be quickly eroded from the onshore and shed directly into deep water. It affects everything from erosion and sediment deposition to water circulation and even climate.

Our research focuses on how such tilting affects the distribution of traps, reservoirs and seals so that we can more effectively explore for hydrocarbons and for carbon storage sites.

The primary objective of the Bureau’s ongoing STARR project is to share our geologic research with our partners in the petroleum industry. Typically, this involves working with partners’ data to enhance knowledge of a geologic problem within a hydrocarbon-productive province or field.

A recent project involving study of shallow (2,000–4,500 ft) Pennsylvanian riverine sandstones in the Midland Basin’s Eastern Shelf was particularly rewarding for me as a researcher. The total areal extent of the Tannehill Sandstone was not known, although several small, scattered fields exist in northern Taylor County and eastern Nolan County, West Texas. Identification of the sandstone interval within the complex shelf succession proved to be a particularly challenging effort, as was the ultimate regional mapping of the unit from the updip portion of the shelf to the downdip slope within the five-county depositional area. Precise mapping revealed multiple fluvial systems that recorded both transport routes to the contemporaneous shelf edge during a relative lowstand of sea level and to a deltaic system restricted to the shallow shelf. Delineation of these sandstone systems now provides our industry partners with a firm basis for targeted exploration. 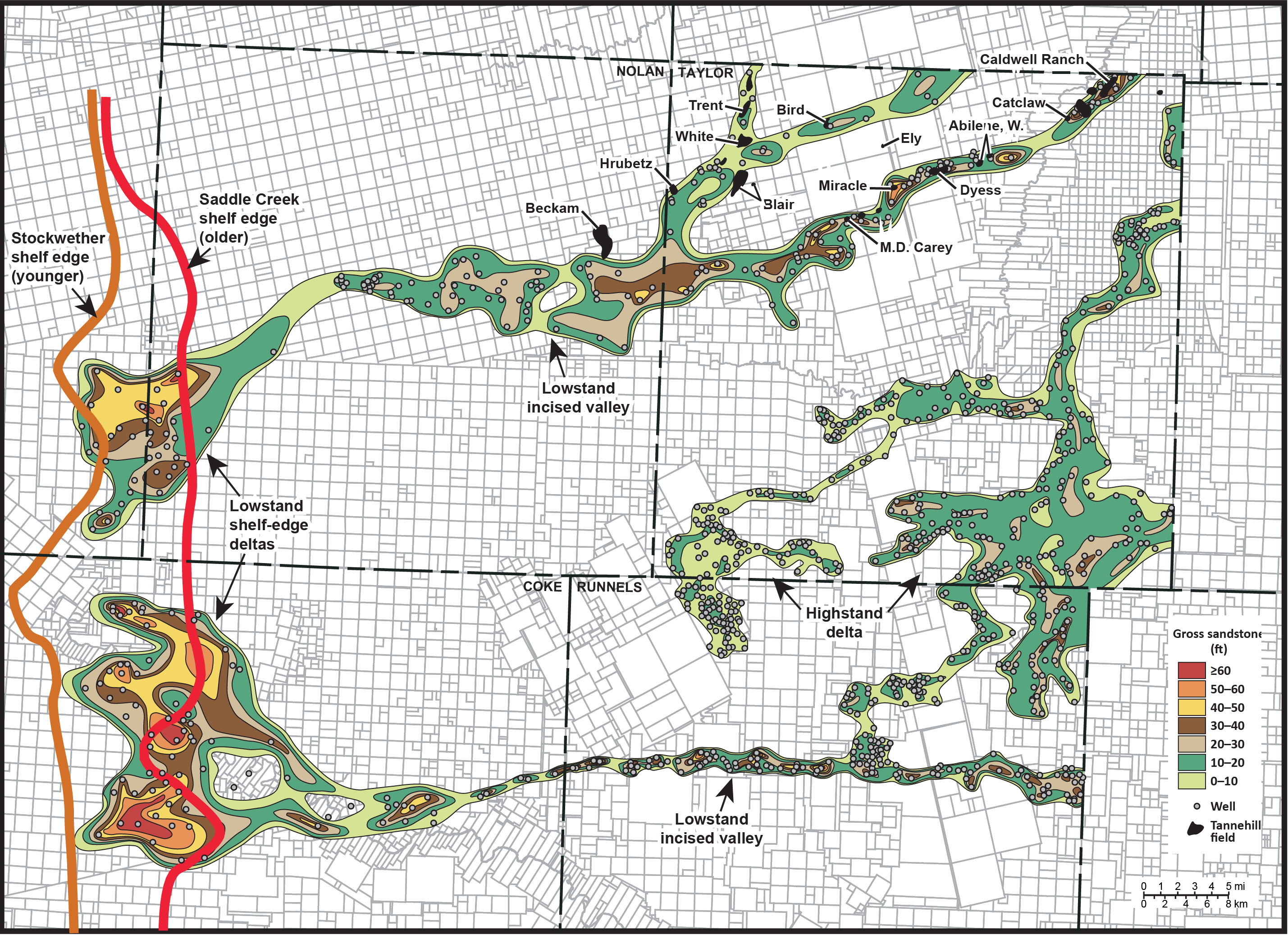