Shorelines are the dynamic boundary between land and water. Bay shorelines on the middle Texas coast have been grouped into 11 types that are distinguished by a combination of elevation, slope, depositional environment, material and consolidation level, and vegetation or habitat (fig. S1; Paine and others, 2016). From highest to lowest elevation, these types are: high and low bluff, sandy slope, fan delta, beach, spit, tidal pass, flood-tidal delta marsh or tidal flat, deltaic marsh, back-barrier marsh or tidal flat, and bay-margin marsh or tidal flat. Together, these shoreline types extend for about 1,065 km among the middle Texas bay systems.

Powderhorn Ranch has more than 20 km of bay or lake shoreline, including 8.4 km along Matagorda Bay and about 12 km along the southeastern shore of Powderhorn Lake. Common shoreline types at Powderhorn Ranch are sandy slopes, spits and beaches, and bay-margin marshes or tidal flats (fig. S2). Each of these shoreline types differs in material composition, elevation, slope, degree of consolidation, and vegetation cover and responds differently to the major causes of shoreline retreat and land loss, including non-storm wave action, storm surge and storm wave action, and relative sea-level rise (figs. S3 to S5). Most of the shoreline along Matagorda Bay and Powderhorn Ranch remains in its natural state. Only near the ranch house has a bulkhead and flanking riprap been emplaced (fig. S6).

Sandy Slopes
Sandy or clayey sand slopes occur along about a third of the Powderhorn Ranch shoreline and are located where low to moderate sandy Ingleside bluffs intersect the shoreline along Matagorda Bay and along Powderhorn Lake near where it joins Matagorda Bay. Sandy slopes are composed of unconsolidated to semiconsolidated sand to muddy sand that can be partly stabilized by upland grasses and shrubs (fig. S7). Elevations on the slopes landward of the shoreline range from 1 to 3 m above sea level. Some of the sandy slopes are fronted by narrow sandy beaches or marshes. Sandy slopes are highly susceptible to shoreline retreat caused by storm surge and storm waves (fig. S4) and moderately susceptible to erosion from non-storm wave activity (fig. S3), but are relatively insensitive to short-term relative sea-level rise (fig. S5) given their higher elevation.

Spits
Spits are low, elongate, and unconsolidated sandy and shelly beaches that form along eroding bay shorelines by longshore drift and lateral migration (fig. S8). At Powderhorn Ranch, they comprise about 18 percent of the total shoreline length and are found across small embayments where topographic swales and drainages reach Matagorda Bay and where Matagorda Bay intersects Powderhorn Lake (fig. S2). Because of their low elevation and unconsolidated state, they are highly susceptible to erosion from non-storm wave action and are moderately susceptible to retreat caused by relative sea-level rise and storm-related surge and waves.

Bay-margin Marshes or Tidal Flats
Bay-margin marshes and tidal flats are the most common shoreline type at Powderhorn Ranch, constituting half of the total shoreline length (fig. S2). They are most common in the lower-energy environment along Powderhorn Lake. Bay-margin marshes and tidal flats have low elevation, minimal slope, muddy sand or sandy mud substrate, and dominant marsh vegetation with interspersed tidal flats (fig. S9). These shorelines are highly susceptible to erosion by non-storm waves and to land loss by submergence related to relative sea level rise. They have a low susceptibility to erosion related to storm surge and storm waves because they are inundated before storm passage.

In the recent study, shoreline movement at Powderhorn Ranch was determined at 180 measurement points spaced at 100-m intervals along the Matagorda Bay and Powderhorn Lake shoreline (fig. S10). Overall, net shoreline movement rates range from retreat at 3.6 m/yr to advance at 1.8 m/yr, averaging retreat at 0.8 m/yr. Translated to land area loss, these data suggest that Powderhorn Ranch land loss averages 1.6 ha/yr for a total estimated land loss of 136 ha from 1930 to 2015. 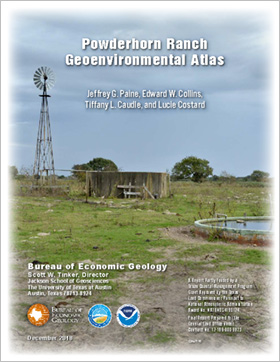