The impact of climate variability on the water cycle in desert ecosystems is controlled by biospheric feedback at interannual to millennial timescales. This paper describes a unique field dataset from weighing lysimeters beneath nonvegetated and vegetated systems that unequivocally demonstrates the role of vegetation dynamics in controlling water cycle response to interannual climate variability related to El Nino southern oscillation in the Mojave Desert. Extreme El Nino winter precipitation (2.3–2.5 times normal) typical of the southwestern U.S. would be expected to increase groundwater recharge, which is critical for water resources in semiarid and arid regions. However, lysimeter data indicate that rapid increases in vegetation productivity in response to elevated winter precipitation reduced soil water storage to half of that in a nonvegetated lysimeter, thereby precluding deep drainage below the root zone that would otherwise result in groundwater recharge. Vegetation dynamics have been controlling the water cycle in interdrainage desert areas throughout the southwestern U.S., maintaining dry soil conditions and upward soil water flow since the last glacial period (10,000–15,000 yr ago), as shown by soil water chloride accumulations. Although measurements are specific to the southwestern U.S., correlations between satellite-based vegetation productivity and elevated precipitation related to El Nino southern oscillation indicate this model may be applicable to desert basins globally. Understanding the two-way coupling between vegetation dynamics and the water cycle is critical for predicting how climate variability influences hydrology and water resources in water-limited landscapes. 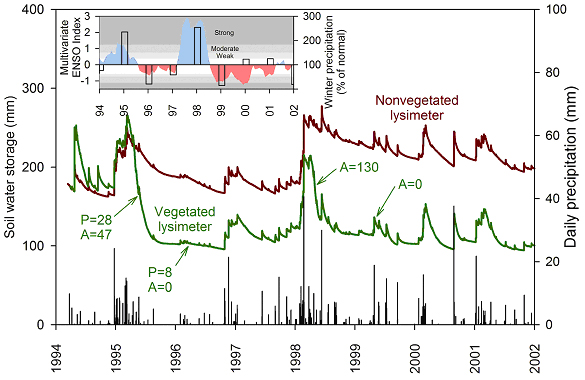 Measured soil water storage to a depth of 2m in both vegetated and nonvegetated lysimeters and daily precipitation depths at the NTS location. Above-ground biomass productivity (g/m2) is shown for measurements in May 1995 and May 1996 for annual and perennial vegetation at the nearby Yucca Mountain site and May 1998 and May 1999 for annual vegetation at the nearby free air CO2 experiment site. (Inset) Relationship between the multivariate ENSO index (blue shading; El Nino, red shading; La Nina) and percent of normal 1971–2000 winter precipitation (normal, 46 mm, December–February; columns) at the NTS location.

Impact of land use and land cover change on groundwater recharge and quality in the southwestern U.S.

Humans have exerted large-scale changes on the terrestrial biosphere, primarily through agriculture; however, the impacts of such changes on the hydrologic cycle are poorly understood. The purpose of this study was to test the hypothesis that the conversion of natural rangeland ecosystems to agricultural ecosystems impacts the subsurface portion of the hydrologic cycle by changing groundwater recharge and flushing salts to underlying aquifers. The hypothesis was examined through point and areal studies investigating the effects of land use/land cover (LU/LC) changes on groundwater recharge and solute transport in the Amargosa Desert (AD) in Nevada and in the High Plains (HP) in Texas, US. Studies use the fact that matric (pore-water-pressure) potential and environmental-tracer profiles in thick unsaturated zones archive past changes in recharging fluxes. Results show that recharge is related to LU/LC as follows: discharge through evapotranspiration (i.e., no recharge; upward fluxes o0.1mmyr_1) in natural rangeland ecosystems (low matric potentials; high chloride and nitrate concentrations); moderate-to-high recharge in irrigated agricultural ecosystems (high matric potentials; low to moderate chloride and nitrate concentrations) (AD recharge: _ 130 - 640mmyr_1); and moderate recharge in nonirrigated (dryland) agricultural ecosystems (high matric potentials; low chloride and nitrate concentrations, and increasing groundwater levels) (HP recharge: _ 9 - 32mmyr_1). Replacement of rangeland with agriculture changed flow directions from upward (discharge) to downward (recharge). Recent replacement of rangeland with irrigated ecosystems was documented through downward displacement of chloride and nitrate fronts. Thick unsaturated zones contain a reservoir of salts that are readily mobilized under increased recharge related to LU/LC changes, potentially degrading groundwater quality. Sustainable land use requires quantitative knowledge of the linkages between ecosystem change, recharge, and groundwater quality. 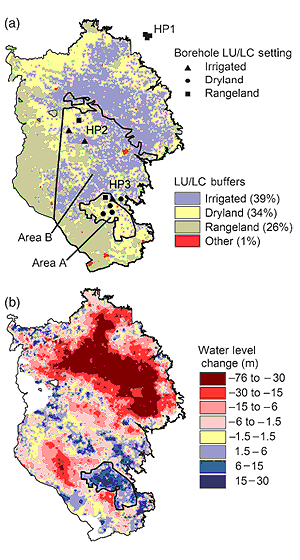 Spatial distribution of (a) dominant land use/land cover (LU/LC) category buffer zones and (b) water level changes in the Southern High Plains in Texas and New Mexico. Borehole locations symbolized by LU/LC category are shown for the HP1, HP2, and HP3 sites. Area A is 3400 km2 and dominated by dryland farming that was analyzed for recharge (Eqn (1)). Area B is 32 400 km2 and includes irrigated and dryland agricultural areas that were analyzed for the impact of LU/LC on groundwater quality. Bank areas in the water-level-change map indicate areas with no data. Actual area percentages are irrigated, 11%, Dryland, 41%; Rangeland, 46%; and Other, 2%.

Evaluation of Evapotranspirative Covers for Waste Containment in Arid and Semiarid Regions in the Southwestern U.S.A.

Performance evaluation of evapotranspirative (ET) covers is critical for waste containment. The purpose of this study was to evaluate ET covers at sites in Texas and New Mexico representative of arid/semiarid regions in the southwestern U.S. using water balance monitoring over 4 and 5 yr periods and water balance simulations using short-term (1–5 yr) and long-term (25–yr) climate forcing. Estimated drainage at the Texas site was related to irrigation while measured drainage at the New Mexico site was restricted to the first 2 yr of the 5 yr monitoring period. ET covers work extremely well in these regions because of the dominance of summer precipitation (62–80%) that corresponds to periods of highest ET. Strong relationships between decreases in soil water storage and vegetation productivity at both sites underscore the importance of vegetation in controlling the water balance in these systems. Simulations of the Texas site indicate that drainage can occur in response to high precipitation near the end of the growing season that can be eliminated with a capillary barrier. Inclusion of a capillary barrier increased available water storage by a factor of about 2.5 at both sites. The capillary barrier effect of drainage lysimeters can result in underestimation of drainage and overestimation of water storage relative to covers not underlain by capillary barriers. The data from this study indicate that a 1 m thick ET cover underlain by a capillary barrier should be adequate to minimize drainage to = 1 mm yr –1 in these arid/semiarid regions. Comprehensive monitoring integrated with modeling is required to assess total system performance to develop a predictive understanding of ET covers.