The Shale Production and Reserves Study, conducted by the Bureau of Economic Geology at The University of Texas at Austin, integrates engineering, geology, and economics in a numerical modeling approach that allows for scenario testing based on many input parameters. The first phase of the study, funded by the Alfred P. Sloan Foundation, investigated production from four major U.S. shale gas formations: Barnett, Fayetteville, Haynesville, and Marcellus. The Sloan Foundation provided a second grant for a second phase of the study, currently wrapping up the investigation of two major shale oil plays, the Bakken and the Eagle Ford.

Some findings: In the base case of the Barnett, the study forecasts a cumulative 44 trillion cubic feet (Tcf) of recoverable reserves, with annual production declining in a predictable curve from the current peak of 2 Tcf per year to about 900 billion cubic feet (Bcf ) per year by 2030.

Drawing on production data from all of the individual wells drilled in the Fayetteville Shale from 2005 to 2011, the Bureau’s assessment estimates technically recoverable gas reserves for the region at 38 Tcf, of which 18.2 Tcf will be economically feasible to recover at natural gas prices near $4 per thousand cubic feet (Mcf) through 2050.

Although low natural gas prices have slowed development in the Haynesville shale gas play of East Texas–northwestern Louisiana, the Shale Study team believes the play remains promising. In its base-case scenario (conservative pricing and other parameters), it estimates that 46 Tcf of cumulative Haynesville production will come from existing and new wells to be drilled through 2045 and producing through 2064.

The Bureau’s Shale Production and Reserve Study was recently awarded a grant by the U.S. Department of Energy (DoE) for an 18-month study to review and update prior analyses of major American shale gas plays. As the United States considers power production options, liquefied natural gas exports, increased manufacturing, and other energy-intensive processes, security of natural gas supply is a critical parameter; these studies represent the most data-intensive, integrated analyses publicly available. The DoE project will help to ensure consistency of approach across the four shale gas plays and will incorporate recent data, allowing researchers to capture new market dynamics, emerging technologies, and company strategies.

Drawing on the experience, expertise, and some of the personnel of the Shale Study, the Bureau has recently launched the Tight Oil Resource Assessment (TORA) research consortium, which will analyze production and the reserve potential of the complex oil-rich source rocks of the Midland and Delaware Basins of Texas. For more information about TORA and how your company can participate, click here. 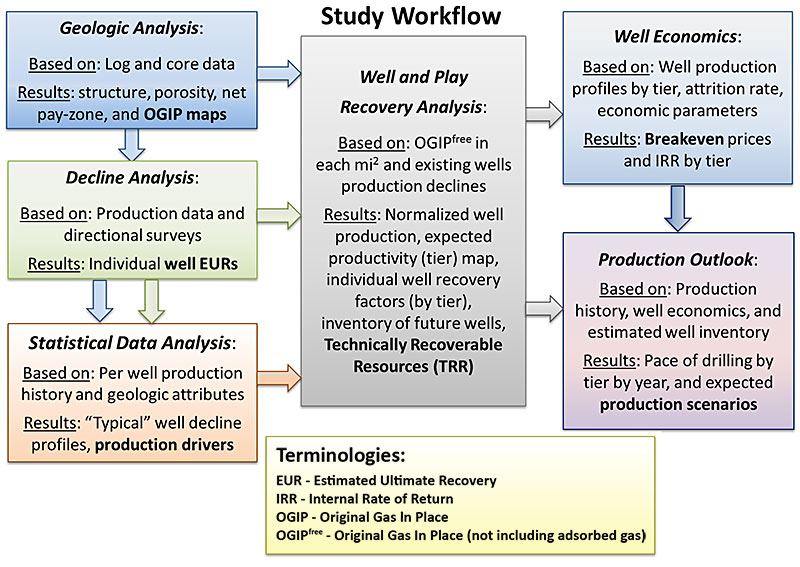