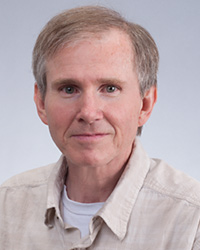 William Ambrose is a geologist specializing in sedimentology, reservoir characterization, and planetary geology. He received a Master of Arts degree in geological sciences in 1983 from The University of Texas at Austin. He has been involved in a number of projects since joining the Bureau of Economic Geology in January 1987. These projects include co-production of gas and hot brines from geothermal/geopressured reservoirs in the Texas Gulf Coast, oil and gas reserves growth in South Texas, coalbed methane in Rocky Mountain basins, reservoir characterization for the Gulf Coast Carbon Center, and a host of international projects sponsored by Santos Ltd., PDVSA, and Pemex.

He is currently the Principal Investigator of the State of Texas Advanced Oil and Gas Resource Recovery (STARR) program.

What are your current research activities?

As Principal Investigator of STARR, I am involved in several reservoir characterization and regional studies of oil and gas plays in Texas, such as the Wilcox Group in the southeastern Gulf Coast and a variety of stratigraphic intervals in the Eastern Shelf of the Permian Basin, including the Strawn Group, Wolfcamp Formation, Cisco Group, Canyon Group, and Caddo Limestone.

What excites you the most about your current research?

Discovering and documenting new information from subsurface rock data and providing new insights on the paleogeography of ancient terrains, which lead to a better understanding of the history of the Earth and the geologic controls on its resources.

What is the desired outcome of your research?

To enable oil and gas explorationists to target and produce new energy resources.

What do you need to make your research efforts more successful?

What are your latest papers/publications, and what is most exciting about them?

My latest publication, scheduled for release in Fall 2020 in the GCAGS Journal, is a regional depositional systems analysis of the Wilcox Group and Carrizo Formation in the southeast Texas Gulf Coast. This study, which integrates core and wireline-log data in an enormous, 13,770-mi²-area, demonstrates that this stratigraphic succession in southeast Texas contains a great variability in depositional systems (especially tidal systems), facies, and reservoir sandstone-body geometry. This finding is exciting and important because it shows that the history of the ancient Texas coastline is much more complex and varied than previously believed.

Who will benefit from your latest paper or publication?

Oil and gas companies, stratigraphers, and sedimentologists who wish to better understand the role that ancient tides and complex depositional systems had in controlling the distribution of sediments in the Gulf Coast.

What was your most exciting past paper or publication, and why?

Bureau of Economic Geology Report of Investigations no. 280, “Pennsylvanian tidal depositional systems in the Anadarko Basin, northeast Texas Panhandle, and northwest Oklahoma.” It showed that cores can be used to reconstruct the nature of ancient tides from more than 300,000,000 years ago.

Ambrose, W. A., Hentz, T. F.,  and  Tussey, L. B., 2015, Pennsylvanian Tidal Depositional Systems in the Anadarko Basin, Northeast Texas Panhandle and Northwest Oklahoma: The University of Texas at Austin, Bureau of Economic Geology, Report of Investigations No. 280, 40 p.

Who are the types of research partners you are seeking, and what skills or expertise could benefit your research?

We seek research partners who are able to integrate a variety of data to effectively characterize oil and gas reservoirs. Desired skills and expertise include rock mechanics, petrophysics integrated with a robust sedimentological approach to reservoir characterization, and oil and gas play analysis.

What have been recent successes associated with your research?

The STARR research team has consistently exceeded its objectives, having been revenue positive throughout its 24-year history. For example, in the first 17 months of the 2018–2020 biennium (September 1, 2018 to January 31, 2020), the STARR program has created more than $80 million of value in the form of severance taxes for the State of Texas. Relative to total funding of $9.9 million over the current biennium, STARR is revenue positive by a factor of 8.1 times.

What is the geographic location of your research?

The entire State of Texas!

Read more about the research behind Bill’s upcoming publication the Wilcox Group and Carrizo Formation in the southeast Texas Gulf Coast.