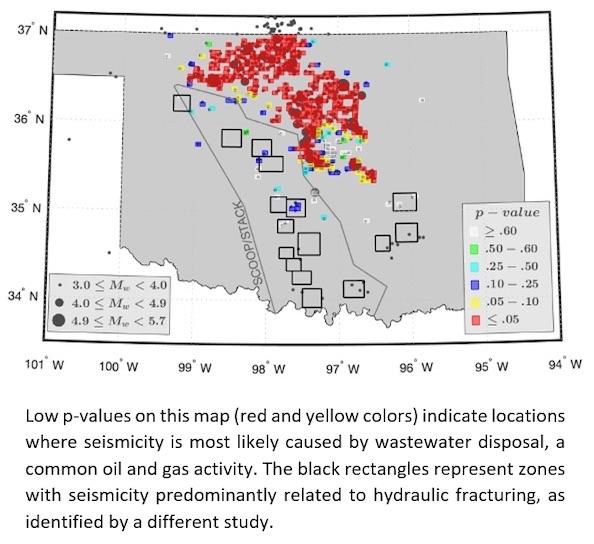 Wastewater disposal has been reported as the main cause of the recent surge in seismicity rates in several parts of the central United States, including Oklahoma. In this article, we employ the semiempirical model of Part 1, the companion to this article (see DOI 10.1785/0120200078), first to test the statistical significance of this prevailing hypothesis and then to forecast seismicity rates in Oklahoma given future injection scenarios.

The results show that the vast majority (76 percent) of the seismically active blocks in Oklahoma can be associated with wastewater disposal at a 95 percent confidence level. These blocks experienced 84 percent of the felt seismicity in Oklahoma occurring after 2006, including the four largest earthquakes. This observation strongly supports the consensus of the scientific community that the main cause of the rise in seismicity is indeed wastewater disposal.

In terms of forecasting power, the model is able to predict the evolution of the seismicity burst starting in 2014, both in terms of timing and magnitude, even when only using seismicity data through 2011 to calibrate the model. Under the current disposal rates, the seismicity is expected to reach the pre-2009 levels after 2025, whereas the probability of a potentially damaging earthquake with magnitude Mw ≥ 5.5 between 2018 and 2026 remains substantial at around 45 percent.

So far either qualitative considerations or arbitrary numerical thresholds were used to establish a probable causal link between increased seismicity and oil and gas activities.