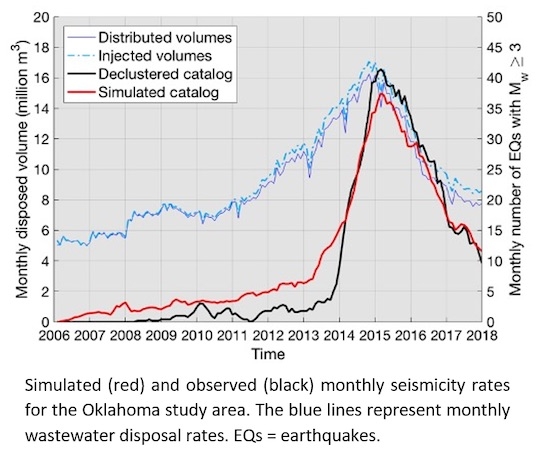 Over the past 20 years, pioneering techniques in hydraulic fracturing enabled the extraction of natural gas and oil from previously unproductive tight shale formations. These techniques, however, lead to massive quantities of coproduced flowback fluids (wastewater) being pumped up together with the crude oil and being disposed of several kilometers underground through injection into high-permeability aquifers. Following an increase in these wastewater volumes, Oklahoma experienced unprecedented levels of seismicity over the past decade, about 100 times higher than the historical average.

In this article, we present a semiempirical model to hindcast the observed seismicity given the injection time history. Our proposed recurrence model is a modified version of the Gutenberg–Richter relation, building upon the seismogenic index model, which predicts a linear relationship between the number of induced events and the injected volume.

Overall, the simulated seismicity rates from our model are in very good agreement with the observed seismicity both regionally and locally, even though the proposed methodology accounts only for the first-order effects of the underlying phenomenon and has essentially only two free parameters for calibration.

We should note the great variability in the modeling approaches found in the literature, which often disagree on fundamental principles behind the parameterization of the wastewater-induced seismicity. Further research is required to establish a scientific consensus around the source of the apparent time lag in the response of the seismicity rates and for the development of a new declustering algorithm tailored for this type of seismicity.

The developed model is applied here to Oklahoma but is generic enough to be potentially applicable to any region affected by wastewater disposal and could potentially be applied also in areas affected by hydraulic fracturing.

The unprecedented seismicity rates within the past decade in several parts of the central United States cannot be modeled using traditional tectonic models.