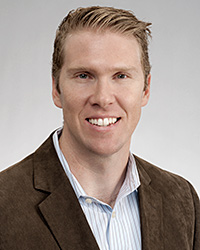 Submarine channels are conduits through which sediment and organic matter are transported to deep-sea basins by sediment gravity flows, modifying the seafloor and the stratigraphic record of environmental change. A fundamental understanding of the controls and processes that form submarine channels remains elusive as a result of few direct measurements of turbidity currents that create them and limited documentation of their longer-term morphodynamic evolution. We evaluate the stratigraphic evolution of submarine channels using seafloor and subsurface examples, combined with simple numerical modeling of the kinematics of submarine channel evolution. Large erosional surfaces are created as a result of the incision of an actively meandering channel into the continental slope. The rate of incision is influenced by the development of a highly variable along-channel gradient, as a result of repeated meander cutoffs that generate knickpoints. Waves of knickpoint retreat leave terraces of cutoff-related remnant channel deposits in their wake. This submarine channel stratigraphic architecture is created without the influence of external controlling factors. Point-bar like deposits on the inner banks of the channel bends are poorly developed to absent in seafloor and subsurface examples, as well as the model. This is the result of channel incision during bend growth, as there is limited preservation potential for deposits on the inner banks of channel bends when the incision rate is relatively large compared to the lateral bend growth rate. The common presence of deep-water channel terraces and large-scale erosional surfaces on the seafloor and subsurface of continental margins suggests that active meandering during incision, with no significant inner-bank deposits left behind, features observed in some terrestrial bedrock meandering channels, might be relatively common in the deep sea.