Earthquake activities in the greater Permian Basin have significantly increased since 2008. Over time, seismic events were unevenly distributed throughout the basin and often occurred in a number of seismic zones which may have disclosed concealed seismogenic structures. Among them, the Snyder area of northwest Texas has a significant seismicity rate, second only to that of the Delaware Basin, a subunit of the greater Permian Basin. A recent study has investigated the concealed seismogenic structures in the Snyder area using three main approaches: (1) relocated and delineated seismicity, (2) performed waveform moment tensor inversion to determine earthquakes’ source mechanisms, as well as (3) conducted stress inversion to assess the stress state. In this presentation I will present the study results. Results show that seismicity are concentrated in the basement-top. The collective pattern of source mechanisms presents a fault system comprising a mix of strike-slip and normal faults. The overall geometry of seismicity distribution illustrates an apparent northeast-to- southwest lineation, aligning with the direction of maximum horizontal stress. This study has further identified several seismogenic cycles in 2017-2021. Results also demonstrate a temporal variation of b-value, which should be associated with the perturbation of effective normal-stress along the preexisting fault planes during the earthquake cycles. It also presents a series of foreshock-mainshock-aftershock sequences that seemingly resemble tectonic-like seismicity. All of which suggest that seismicity in the Snyder area involves re-activation of basement-rooted faults. 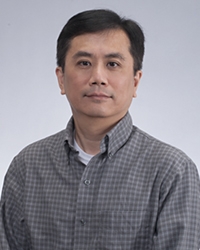