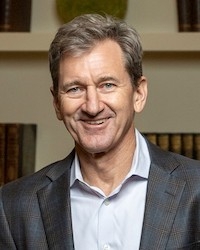 Scott Tinker brings industry, government, academia, and nongovernmental organizations together to address major societal challenges in energy, the environment, and the economy. Dr. Tinker is Director of the Bureau of Economic Geology, the State Geologist of Texas, and a professor holding the Allday Endowed Chair in the Jackson School of Geosciences at The University of Texas at Austin. With Director Harry Lynch, Tinker co-produced the award-winning documentary films Switch and Switch On, which have been screened in over 50 countries. Dr. Tinker founded the nonprofit Switch Energy Alliance, whose educational materials appear from schools to board rooms globally. Tinker is the host of PBS Energy Switch, an energy and climate talk show appearing on over 200 PBS stations nationwide, and Earth Date, featured weekly on over 450 public radio stations in all 50 United States. In his visits to some 60 countries, Scott has given over 1000 keynote and invited lectures. Dr. Tinker presented a TEDx talk on The Dual Challenge: Energy and Environment. Scott serves on public company boards and science councils, Trinity University’s Board of Trustees, and is an angel investor who has helped bring companies from startup to acquisition. His writing has appeared from Forbes to Fortune to Scientific American. Dr. Tinker has served as president of several international professional associations and is an AGI Campbell Medalist, AAPG Halbouty Medalist, GCAGS Boyd Medalist, AIPG Parker Medalist, and a Geological Society of America Fellow.

Dr. Tinker’s academic training and professional work experience are in carbonate stratigraphy and reservoir characterization. He has conducted extensive fieldwork in the Cretaceous of northern Mexico and the Permian of West Texas; extensive core- and log-based regional subsurface work in the Devonian of the Western Canada Sedimentary Basin; and integrated core, log, and seismic 3D reservoir characterization and modeling in the Permian Basin of West Texas. Dr. Tinker has served on dozens of graduate student committees at UT Austin and taught a graduate course in reservoir characterization. He has received best paper awards for work appearing in the AAPG Bulletin and the Journal of Sedimentary Research.

Since 2000, Dr. Tinker has been deeply involved in academic administration, professional society leadership, government policy, program and infrastructure growth, and global outreach. His research efforts are centered on the interface between global energy supply and demand, environmental impacts of energy, and economic drivers and scale of energy. He calls these “the Three E’s” and the overlap space “The Radical Middle.” Dr. Tinker’s passion is understanding and communicating the framework, challenges, timeframe, and scale of the energy transition, which he defines as lifting the world from poverty and minimizing the environmental impacts of solar, wind, batteries, nuclear, oil, coal, and natural gas. With Harry Lynch and the team at the Switch Energy Alliance, Tinker has produced a world class collection of energy education materials and programs, available at SwitchOn.org.  These include feature length films Switch and Switch On, the Switch Energy Lab, the Museum Film Energy Makes Our World, over 300 short format films (primers, 101’s site visits, expert interviews, and more), a major international Case Competition, the Switch Energy Classroom in thousands of high school classrooms, and much more.

Dr. Tinker helped establish several major programs at the Bureau of Economic Geology in unconventional oil and gas reservoirs funded by multimillion-dollar grants from the Alfred P. Sloan Foundation, Department of Energy, and industry. These studies seek to understand the capability of U.S. shale to contribute significantly to supply in the coming decades. Extensive studies of the four major shale gas and three major shale oil basins considered several major questions: (1) What is the resource base in place? (2) What portion of the resource is technically recoverable? (3) What portion of the resource is economically recoverable? and (4) What will future production scenarios look like, given interplay between price, cost, demand, technology, and policy? The results of this research help U.S. and global decision makers formulate intelligent, thoughtful regulatory and energy policy.

With Bureau associate director Jay Kipper, Dr. Tinker conceived of and formed the industry-supported and Bureau-managed Advanced Energy Consortium (AEC). For a decade Dr. Tinker served as chair of the Board of Management of the AEC. The AEC developed intelligent subsurface micro- and nanosensors that can be injected into the subsurface to help characterize the reservoir space in three dimensions and improve the recovery of existing and new hydrocarbon resources. Consortium members are researching near-term potential to increase the recovery rate in existing reservoirs by exploiting the unique chemical and physical properties of materials at the nanoscale. By leveraging existing surface infrastructure, this technology has the potential to minimize the environmental impact of oil and gas exploration and production.

Dr. Tinker has served on the Jackson School’s Executive Committee since the school formed in 2001. He acted as Associate Dean of Research in the Jackson School of Geosciences for eight years. Dr. Tinker is a member of many professional societies and serves on numerous councils and committees. He has been a member of the American Association of Petroleum Geologists (AAPG) since 1982 and served as AAPG president in 2008–2009, Distinguished Ethics Lecturer in 2005-2006, and Distinguished Lecturer in 1997. Dr. Tinker has been a member of the Society of Petroleum Engineers (SPE) since 1982, and served as an SPE Distinguished Lecturer in 2002–2003. He has also served as president of the Austin Geological Society, the Gulf Coast Association of Geological Societies, and the American Geosciences Institute. Since becoming the State Geologist of Texas in 2000, Dr. Tinker has been a member of the Association of American State Geologists (AASG), serving as its president in 2006–2007. Dr. Tinker is a Fellow of the Geological Society of America (GSA) and in 2013 served as the GSA Halbouty Distinguished Lecturer.

Dr. Tinker’s involvement in government policy spans local, state, federal, and international venues. In 2006, the U.S. Secretary of Energy appointed him to serve on the National Petroleum Council (NPC); he currently serves on the NPC’s Committee on Resource Development. In 2007, he was appointed by the governor of Texas to the Interstate Oil and Gas Compact Commission (IOGCC). From 2003 to 2009, he served on The National Academies National Research Council Board on Energy and Environmental Systems (BEES). He has also served as the director of the Petroleum Technology Transfer Council (PTTC), heading the Texas Regional Lead Organization from 2000 to 2012. He was a member of the National Academies Roundtable on Oil and Gas and the Aspen Institute’s Shale Governance Forum. Dr. Tinker has testified before the U.S. Senate and House of Representatives and briefed Senate and House staff. As State Geologist, Scott was appointed by the lieutenant governor of Texas in 2001 to serve on the Oil Field Cleanup Fund Advisory Committee, and by the governor of Texas in 2005 to lead the national competition to bring the clean coal project FutureGen to Texas, in which Texas placed two sites in the final four.

Dr. Tinker currently serves on Shell’s Science Council, the Board of Trustees at Trinity University, is a Trustee Associate for Southwest Research Institute, and on the Alumni Advisory Board of Earth and Environmental Systems at the University of Michigan. He has served on Brigham Exploration’s Public Board of Directors, BP’s Technical Advisory Council, Sandia National Laboratory’s Geoscience Foundation Advisory Board, QTSI’s Board of Directors, the National Academies Board on Energy and Environmental Systems, and the Board of Managers for X-Microwave. He speaks often with industry Boards and C-Suites. Dr. Tinker is a trustee of the American Association of Petroleum Geologists Foundation and the American Geological Institute Foundation. He and his wife Allyson contribute time and resources to educational organizations and institutions that serve society.

Dr. Tinker is invited to speak hundreds of times per year somewhere in the world to audiences of all kinds: from Boards of Directors to university and high school students; keynote addresses at major international conferences to invitation only gatherings of thought leaders and decision makers.

“I have watched and attended an awful lot of virtual meetings, webinars, and geology talks this year. Yours, this one, is probably the most important and thought provoking of all. Thank you very much.” Lecture to Geological Society of London and Petroleum Exploration Society of Great Britain

“I like very much your style of interacting with industry people, the public and the government on realism and balance. I don’t know anyone else with your visibility who delivers crafted messages to these audiences. I admire what you are doing.”

“I am indebted to you for your exacting and enthralling overview, which did so much to guide these directors in their respective roles.”

“We have been overwhelmed by the positive responses we’ve received from all those attending your keynote speech.”

“A colleague of mine recently sent me the following presentation by Dr. Scott Tinker. I must say it's one of the best presentations I have ever seen!”

“At the end of most of the lectures this association sponsors, attendees edge toward the door anxious to attend this or that. That is, except for yours, which looked like the end of a church service where everyone stays to visit. In your case, it was to go, ‘Wow, this is really, really, interesting stuff.’”

“You were outstanding, and by far the best speaker at the event. We have tallied the group feedback, which confirms that yours was the best talk.”

“Much praise was given on your compelling content, but beyond that, my guys very much enjoyed your asides, and your very entertaining podium patter. Our evaluation survey showed you as the top-rated speaker.”

“I wanted to thank you once again for a great presentation.  The board really enjoyed it and you were right on the mark for what we needed.”

“Your insights, enthusiasm and presentation content definitely helped enrich our conference. We appreciate the investment of your time and preparations….”

“We have received great comments back on your presentation, and I cannot thank you enough for squeezing us into your obviously very hectic schedule. Everyone wants you back.”

“I present at major conferences globally. But I hate it when I have to follow you.”

“Scott – you hit it so far out of the park…. thanks for making me look good!”

“I just watched your TED talk. Very impressive! Keep speaking the real truth. I literally clapped as you were concluding.”

"I recently attended a keynote Scott gave at the annual meeting of our Association. It was one of the best presentations we’ve ever had."

“Yours is the most balanced, non-political statement of the dual challenge that I've heard.  It is really terrific!”