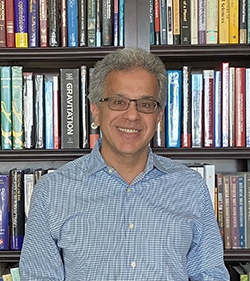 Dr. Saleh received a PhD in electrical and computer engineering from the University of Wisconsin-Madison in 1991 in the area of feedback control theory. He joined Shell Development Company in Houston in 1991 and served as a research engineer until 2003 focusing on applications of advanced digital signal processing and systems theory to seismic data processing and interpretation, including noise attenuation, data compression, amplitude interpretation, and novel applications of multi-dimensional hexagonal sampling to speed up seismic imaging.

After retiring from Shell, Dr. Saleh joined Rice University in Houston as Professor in the Practice, where his teaching and research interests are focused on complex emergent systems and their applications in engineering and the natural sciences, with particular emphasis on machine learning and feedback control of multi-agent networks. In 2021, Dr. Saleh joined the Bureau of Economic Geology at the University of Texas in Austin, where he consults on developing new applications of subsurface imaging technologies to enable opportunity identification for renewable energy and the future low-carbon economy.