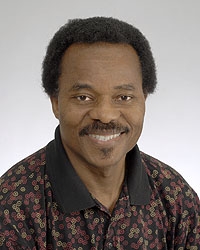 I am interested in seismic data interpretation of sedimentary basins, with particular emphasis on exploration for hydrocarbon reservoirs. My more than 30 years of experience in this field range from processing and interpreting P-wave seismic data sets from the Niger Delta, Equatorial Guinea, and the Cameroons in West Africa; the Trenton-Black River data from Canada for hydrothermal dolomite reservoirs, and the Frio Formation in the of Gulf of Mexico, USA. My experience also include processing, extraction of velocity ratios, and interpretation of converted (P-S) seismic wave data from the Blackfoot field in Canada.

For the past six years, I have been involved in the use of seismic attributes in the evaluation of the Frio Formation, Austin Chalk, and Eagle Ford Shale in South Texas Gulf Coast. My current research is in the use of seismic diffraction image in the evaluation of unconventional hydrocarbon resource plays—establishing relationships between diffraction energy and lithology, fractures, faults, and fluid saturation. In this regard, I have interpreted data sets from the Eagle Ford Shale and Austin Chalk in South Texas, and the Bazhenov Shale and carbonates in Russia.