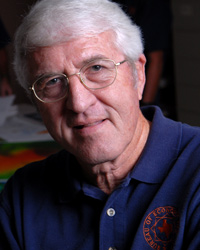 Bob Hardage is the Chief Scientist for the Exploration Geophysics Laboratory (EGL) and a Senior Research Scientist at the Bureau. He received a Ph.D. in physics from Oklahoma State University after completing a NASA-sponsored investigation of micrometeorite impact on space vehicles. He began work for Phillips Petroleum Company in 1966 and concentrated on geophysical modeling, seismic imaging, seismic stratigraphy, vertical seismic profiling, and exploration management. After serving as Exploration Manager, Asia and Latin America, he left Phillips in 1988 to join Western Atlas International, Inc., where he was Vice President of Geophysical Development and Marketing for Atlas Wireline Services until 1991. Hardage is the Bowling Professor of Exploration Geophysics at the University of Texas at Austin since 1998 and served as President of the Society of Exploration Geophysicists (2011 - 2012). He is recipient of the AAPG Distinguished Service Award, the Jackson School of Geosciences Outstanding Service Award, and is former editor of SEG's journal Geophysics.

What are your current research activities?

For the past 6 years I have focused on developing technology that allows full-elastic seismic data to be acquired with simple, low-cost, P-wave seismic sources. Four patents have been issued to the UT Board of Regents, and the UT Office of Technology Commercialization has established a company named VertiShear to commercialize the technology.

What excites you the most about your current research?

I am too old to get excited about research activities any more. However, there is a feeling of accomplishment concerning this present research effort because the Exploration Geophysics Laboratory [EGL] is the only group that is developing this simplified, low-cost approach to acquiring P-wave and S-wave seismic data. There is naturally a sense of reward in being the developer of a technology that holds great promise for benefiting seismic reflection seismology. It is also a pleasure to partner with UT in the commercialization effort.

What is the desired outcome of your research?

The long-term objectives of this research are to lower the cost of acquiring full-elastic seismic data to the cost of acquiring standard, single-component, P-wave seismic data, and to allow full-elastic data acquisition to be done across all Earth-surface conditions. Presently, standard S-wave sources cannot operate across swamps, marshes, areas of dense timber, or rough mountainous terrains. Unfortunately, the current adverse economy across the oil and gas industry is restraining the growth of this technology, just as it is all new technologies.

What do you need in order to make your research efforts more successful?

I have to get a broader base of people engaged as co-developers of the technology, particularly people in commercial seismic data-processing shops and real-world explorationists. I was heavily involved in transferring VSP [vertical seismic profiling] technology into commercialization operations before I came to BEG. That experience convinced me that the most critical thing you must do to cause acceptance of a technology is to build a compelling portfolio of successful case histories. The type of case history that is needed for this current technology development requires a year or more to create, so EGL has to implement a multipronged case-history program that engages several companies so that several case histories are documented quickly.

What are your latest papers/publications, and what is most exciting to you about them?

I am somewhat of an odd duck in the publication arena compared to my JSG [Jackson School of Geosciences] colleagues, because I prefer to publish where I can grab the attention of the end user of EGL technology, not where I can share neat research findings with the research community. The end users of EGL technology are oil and gas companies, particularly small independents who have no internal research activity. These people read trade journals, not peer-reviewed research journals. Thus my recent publications have been in magazines such as Oil and Gas Journal and American Oil and Gas Reporter so I can inform decision makers in these small companies about our new low-cost approach to P-wave and S-wave imaging. I always get inquiries from companies after each publication in these trade journals. Some of these contacts have led to EGL sponsorships.

Who will benefit from your latest paper or publication?

The benefactors will be anyone who wishes to optimize the amount and types of information that can be compiled across a prospect area with seismic reflection seismology. My experience is that small independents react more quickly to try a new idea than do large majors and national oil companies.

What was your most exciting past paper or publication, and why?

Again, I just do not get excited about technical publications. That feeling is reserved for Tom Clancy novels. However, I will say that the most influential publication I have ever written was (and still is) my VSP book [Vertical Seismic Profiling, 1983, Pergamon]. This book was the first in the English language on the topic of VSP. Evsey Gal’perin wrote a VSP book in Russian about 5 years before my book. Dr. Gal’perin and I became good friends, and I hosted him for a 3-month visit at Phillips Petroleum, which is where I started my VSP research. My book came out during a boom time in the oil business (1983), and I was swamped with VSP lecture tours, in-house seminars, and public and private classes for several years. I still have to do a VSP training school now and then. That book has gone through three editions, and the third edition was completely sold out about 8 years ago. My wife, Susan, occasionally checks Amazon to see how many used copies of the book are offered for sale. It is not uncommon to see copies of Edition 1 offered for prices ranging from $1500 to $2200. I am pressured to write a new edition but just do not see how that will be possible. I have taught and trained several hundred people in VSP technology over the past 37 years since I started VSP research at Phillips. During the 1980’s, I was told, and frequently saw with my own eyes, that there was a copy of my book in every logging truck that was used to collect VSP data. Engineers were expected to read the book if things got boring on the job. I think this required reading would probably be just more boredom for most of those folks.

Who are the types of research partners you are seeking?

EGL needs research partners who will test our technology of practicing S-wave reflection seismology with P-wave sources in real-world situations that have commercial impact. These people have to be willing to adopt the data-processing strategies we follow and devise ways to improve those strategies. Because of the urgency of building a portfolio of case histories, our partners must help with this case-history mission.

What are the desired relationships, expertise, or skills that could be brought in to benefit your research?

Our emphasis now is on developing open-source software for the small seismic data-processing shops that service the small independents who wish to practice the technology that UT’s VertiShear is commercializing. The segment of VertiShear technology that has attracted the most attention is the option whereby S-wave images and S-wave attributes are extracted from the SV-P converted mode that resides in the same vertical-geophone data that have been used for decades to make only P-P images. This high interest level in the SV-P mode among operators is caused by the possibility of utilizing the hundreds of thousands of square miles of legacy P-wave data that are preserved in seismic data libraries around the globe to make both P-mode and S-mode images. There is no lower-cost way to gain access to both P and S seismic data than to lease seismic data rather than recording new data. Small data-processing shops do not have the software that can image SV-P data, so EGL is working toward providing open-source software that can do the data migration that is required.

What have been recent successes associated with your research?

I have been invited to give 12 internal seminars and talks to geophysical societies to explain this new technology, and also was recruited to conduct a 2-day global webinar on the technology for SEG. The response has been 100-percent positive in all of these exchanges. EGL is now subcontracted to the Energy Frontier Research Center at the University of Illinois to use VertiShear technology in CO2 sequestration research. Five companies were discussing joint projects to demonstrate the technology just before the oil-price crisis swept across the oil industry. Only two of these projects went forward, and they are still in progress. Two funding proposals for extended research are being considered by the U.S. Department of Energy. We have a great case history in which we used 12-year-old legacy seismic data to create S-wave images. The S-wave definition of productive facies in this instance is excellent.

What is the geographic location of your research?

So far, research has been limited to U.S. land-based data. We have used data from the Appalachian Basin, the Illinois Basin, the Midland Basin, South Texas, and Kansas.