Anatomy of a Paleozoic Basin: The Permian Basin, USA, Volume 2 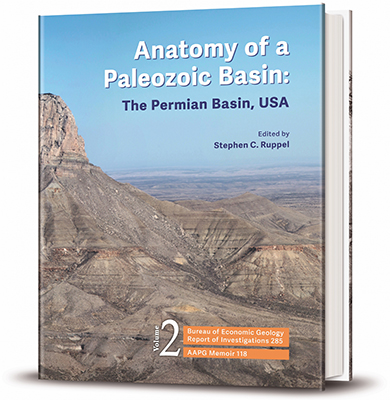 Purchase at The Bureau Store

The second volume of this two-volume set is now available, completing the first comprehensive analysis of the Permian Basin in more than 60 years. The 26 chapters in the two volumes cover a breadth of Permian Basin topics and include 4 chapters on structural geology, tectonics, and Precambrian geology; 4 on paleontology and biostratigraphy; 16 on Paleozoic sedimentology and stratigraphy; 1 on hydrocarbon production; and 1 that provides a history and synthesis of the major depositional and deformational events that formed the basin during the Paleozoic. These chapters collectively provide a spectrum of data and interpretations that characterize one of the largest hydrocarbon-producing basins in the world. This publication will interest all who seek information on the distribution of hydrocarbons in the basin as well as those wanting to better understand the evolution of the basin during the Phanerozoic.

You can purchase this publication at our store by clicking here.

Stephen C. Ruppel, Ph.D., was a Senior Research Scientist at the Bureau of Economic Geology at The University of Texas. Steve had more than 40 years of research experience in the sedimentological and geochemical characterization of carbonate and mudrock reservoir systems. He authored more than 350 papers, reports, and abstracts on the stratigraphy, sedimentology, and geochemistry of Paleozoic and Mesozoic carbonate and mudrock systems.

ANATOMY OF A PALEOZOIC BASIN: THE PERMIAN BASIN, USA, VOLUME 1