Will Water Issues Constrain Oil and Gas Production in the U.S.? 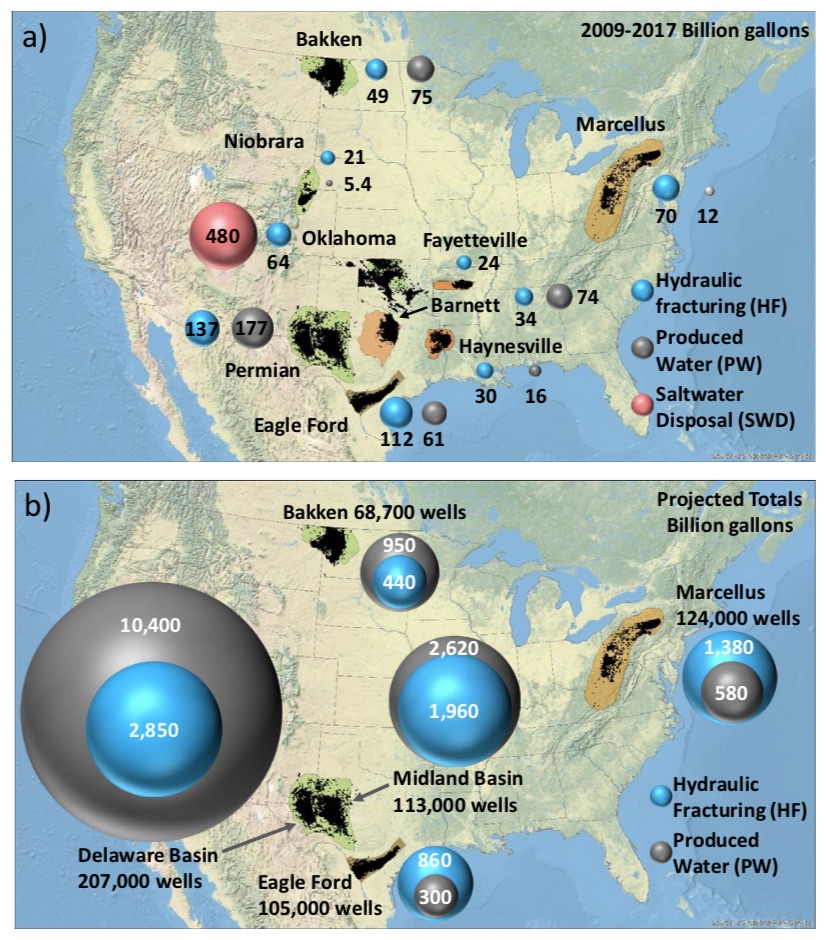 The U.S. became the largest global oil (18 percent of global total) and natural gas (20 percent of total) producer in 2018, with unconventional oil and gas (UOG) accounting for ~60 percent of domestic oil and ~70 percent of natural gas supplies. However, there are concerns about adverse impacts on water. The objective of this study was to address the following:

Results show that during the past nine years (2009–2017) an aggregated total lateral length of ~440×106 ft (134,000 km; ~73,000 wells) was drilled in the eight plays, equal to ~3× the Earth’s circumference (40,000 km). To fracture the rock, a total of ~480 billion gallons (Bgal) (~1,800 BL, 1.8 km3) of water was used. Total water withdrawal showed a marked increase in HF water use, depleting groundwater (GW) in some semiarid regions (e.g., by ≤58 ft [18 m]/yr in Eagle Ford). Water scarcity is projected in some regions within the Eagle Ford and Permian plays, where projected HF water demand exceeds planned GW depletion. Oil plays generated much more PW than gas plays, with the Permian producing ~15× more water than the Marcellus (2009–2017). The projected PW volume in the Permian Delaware Basin is equivalent to the capacity of Lake Mead, the largest U.S. surface-water reservoir, and equal to ~2× water use in Texas in 2017.

Water issues related to both HF water demand and PW supplies may be partially mitigated by closing the loop through reusing PW for HF of new wells. However, projected PW volumes exceed HF water demand in the semiarid Bakken (2.1×) and Permian Midland (1.3×) and Delaware (3.7×) oil plays, with the Delaware accounting for ~50 percent of projected U.S. oil production. Therefore, water issues may constrain future energy production, particularly in semiarid oil plays.