Can We Beneficially Reuse Produced Water from Oil and Gas Extraction in the U.S.? 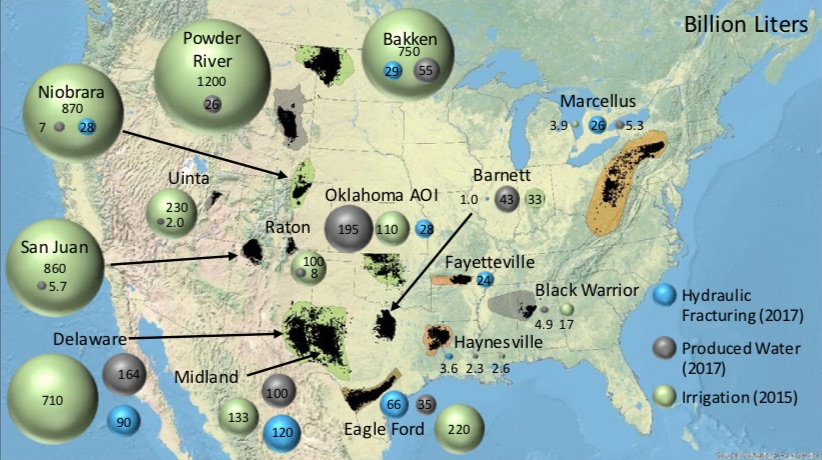 There is considerable interest in beneficial use of produced water (PW) from oil and gas plays outside of the energy sector. However, many basic questions need to be resolved to assess the feasibility of beneficially reusing the PW.

In this study, we quantified PW volumes from major unconventional oil and gas (UOG) plays and compared those with 2015 water demand for irrigation, municipal use, and other sectors. We evaluated PW quality from the USGS Produced Waters Database and the literature and examined treatment options for PW.

Results of the analysis indicate that PW volumes from UOG reservoirs for 2017 totaled ~600 billion liters (BL, 160 Bgal). One year of PW is equivalent to ~60 percent of one day of freshwater use in the U.S. (excluding the thermoelectric sector). Reuse of PW for hydraulic fracturing (HF) within the energy sector would reduce total PW volume because only half of the plays have PW in excess of HF water. PW from coal bed methane (CBM) reservoirs is ~10 percent of that from UOG plays (46 BL [12 Bgal] in 2017). Irrigation exceeds PW volumes from UOG plays by ~5×. While irrigation can accommodate PW at the county scale in most plays, PW would mostly only constitute ~1 percent of irrigation in counties with large irrigation demands. Irrigation exceeds PW from CBM plays by ~50×. Therefore, PW would not substantially alleviate water scarcity related to irrigation demands. Municipal water use is ~2× PW from UOG reservoirs but locally greatly exceeds PW where municipal demands are high. PW quality is variable, with median total dissolved solids (TDS) up to 244 g/L in the Bakken (~7× TDS of seawater). The high TDS of PW generally requires thermal distillation, which is expensive and energy intensive. Desalinating PW would result in large volumes of concentrate for disposal, or treatment to zero liquid discharge with solids. For example, the salts that would result from PW from the Permian Delaware Basin in 2017 would represent ~3,000 Olympic swimming pools of salt, assuming 100 g/L TDS. Large knowledge gaps about PW quality, treatment efficiency, lack of regulations designed specifically for PW, and economic factors currently preclude beneficial use of PW outside of the energy sector. The issues identified with beneficial use of PW outside of energy underscore the need to maximize reuse within the energy sector to alleviate water scarcity related to water demands for HF and other adverse impacts.