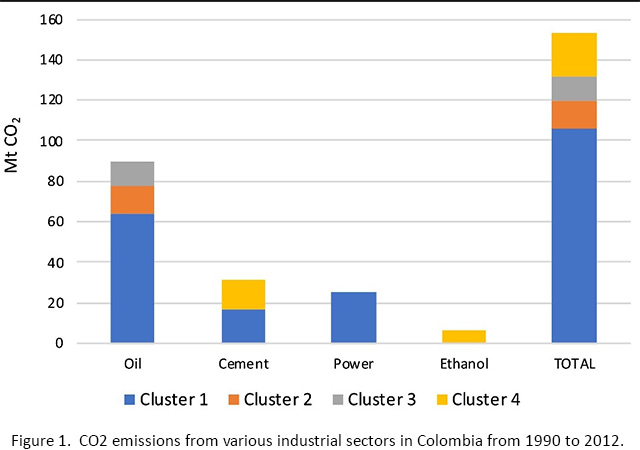 The use of CO2 for enhanced oil recovery (CO2-EOR) is a promising alternative for reducing the cost of carbon capture and storage (CCS). In this study, the technoeconomic potential of integrated CCS-EOR projects for reducing greenhouse gas emissions in the Colombian oil industry is estimated. For this purpose, a source–sink matching process is carried out, including CO2 capture potentials in sources from the petroleum, cement, power generation, and bioethanol industries, as well as from CO2 storage in oil fields suitable for EOR. The results indicate that a total of 142 million tons of carbon dioxide (tCO2) could be stored and would deliver 465 million barrels through five CCS-EOR projects in four clusters identified around the country. The levelized cost for capture ranged between 12 and 209 Euros (€) per tCO2, the cost of CO2 during EOR operations ranged between 24 and 59 €/tCO2, and finally, the cost of CO2 transport ranged from 1 to 23 €/tCO2. The CO2 mitigation potential of CCS-EOR represents 25 percent of forecasted oil industry emissions in Colombia for the period 2025–2040. Compared with the intended nationally determined contribution target set by the Colombian government, CCS-EOR projects could contribute 7 percent of the total accumulated emissions reductions by 2040.