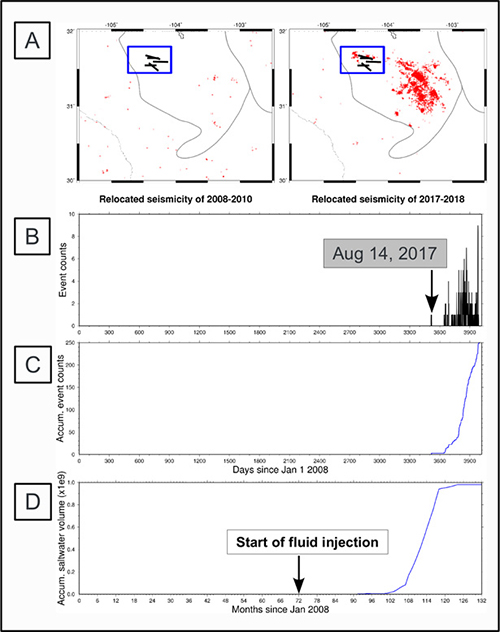 The Greater Permian Basin is not only a complex tectonic regime, it has also been and continues to be a productive oilfield where the seismicity rate in the basin since 2008 has significantly increased. Since 2015, our understanding of the seismogenesis in the basin has increased, owing to the establishment of a statewide seismic network, known as TexNet, for monitoring earthquake activities. A crucial component of this earthquake monitoring is to improve the accuracy of the hypocentral location, which relies on an accurate velocity model that can better confirm the existing regional tectonic regime. We collected data from current TexNet operations and previously deployed seismic arrays and performed a joint local and teleseismic earthquake tomographic inversion, resulting in a 3-D tomography model for earthquake monitoring. The preferred 3-D tomography model includes a prominent feature at a depth range of 0–20 km, where distinct lower wave-speed anomalies overlap with the surface trace of the Delaware Basin. These anomalies suggest a basin-scale lithological difference from surrounding regions and corroborate basin characteristics. Findings also suggest that the Midland Basin may be more lithologically uniform than the Delaware Basin. A strong correlation exists between dense seismicity clusters and the obtained lower Vp/Vs ratios. Four significant clusters having relatively low Vp/Vs ratios were identified. Using the Vp/Vs ratio as a proxy to evaluate the state of the pore-fluid pressure, we think this spatial correlation suggests that the Greater Permian Basin currently comprises overpressurized fluid-filled host rocks. Our tomographically relocated seismicity suggests spatial correlation between the seismicity and the presence of higher pore-fluid pressure.

•    A crucial component in earthquake monitoring is a velocity structure that can best reflect the regional tectonic regime.
•    We effectively developed a tomographic velocity model for much of West Texas and southeast New Mexico for the purpose of earthquake monitoring.
•    Distribution of the Vp/Vs ratio shows basin-scale features that suggest high pore-fluid pressure existing in the Greater Permian Basin.