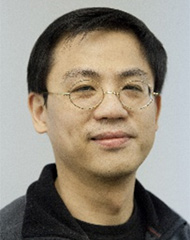 nanopores within liquids-rich unconventional plays. Such “fluid inclusions” are isolated during natural processes and record certain chemical and physical conditions attending the generation, migration, and entrapment of the original fluid. By studying these encapsulations with a combination of unique and classical techniques, explorationists can reduce risk associated with identifying and exploiting productive reservoirs.

Fluid inclusion stratigraphy (FIS) is an automated, high-throughput process that macerates approximately 0.5 gm of rock material in a vacuum system and analyzes the liberated volatiles species by direct quadrupole mass spectrometry. The process generates a depth record of C1-C13 organic species, and inorganic compounds, with individual sample analytical times of less than 1 minute.

Because FIS is non-selective, it samples multiple fluid populations, including those that may be recent, and others that may have been trapped in the remote past. Empirically, however, it is more commonly the case that the dominant bulk hydrocarbon responses obtained by FIS analysis of self-sourced (or proximally sourced), self-sealed reservoirs are related to the present-day fluid that is recoverable from the formation, at least to a first approximation. This observation makes FIS a useful tool for describing the vertical and lateral distribution of the recoverable fluid and its characteristics in unconventional reservoirs. Coupled with the ability to perform these analyses on archived rock material of any age, and the fact that these trapped fluids are generally protected from post-entrapment ingress or egress of material, the relationship of trapped fluid to produced fluid allows the likely resource potential of an area to be mapped using old vertical penetrations that targeted conventional reservoirs. This information can be used for well planning, and for confirming hydrocarbon distributions indicated by independent techniques.

Classical fluid inclusion approaches also benefit unconventional plays, in that they can provide more specific information on selected individual inclusion populations. Homogenization temperatures, (a.k.a., bubble point or dew point temperatures) of petroleum inclusions generally provide information on saturation state of the fluid rather than actual encapsulation conditions. Many unconventional reservoirs have experienced significant uplift, providing the opportunity for the fluids generated and trapped at maximum thermal exposure to undergo phase separationduring exhumation. Optical work can also provide evidence for multiple pulses of migration or generation, including a free gas phase.

Homogenization temperatures of aqueous inclusions, on the other hand, tend to be close to actual trapping conditions in the sedimentary environment, even without pressure corrections, and can be used to estimate temperatures and timing of events (cementation, fracture formation, generation/migration). Maximum burial temperature is often indicated by a specific population of inclusions, and, empirically, can often be accurately translated to a vitrinite-equivalent maturity. This independent, inorganic method for determining maturity can be useful in cases where standard maturity methods are problematic or equivocal.

Finally, integration of FIS with other chemical analyses that use the same sample and analytical geometry are being developed and will be discussed.