How Much Water can be Captured from Flood Flows to Store in Depleted Aquifers for Mitigating Floods and Droughts? A Case Study From Texas, U.S.A. 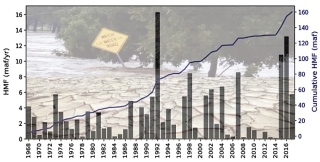 Climate extremes, including floods and droughts, impose challenges for water resource managers, resulting in too much water during floods and insufficient water during droughts. There is considerable interest in capturing flood flows and storing them in depleted aquifers through managed aquifer recharge to even up water supply and to partially mitigate floods and droughts in the U.S. In this study, we evaluated the feasibility of capturing and storing flood flows in depleted aquifers in Texas as a case study. This study quantified the volume of high magnitude flows (HMFs) (≥95th percentile) that could be captured in 10 major rivers that discharge to the Gulf of Mexico from Texas. Daily mean streamflow data from 152 US Geological Survey (USGS) stream gages with at least 50 years of record within the Texas Gulf region were used in this analysis. This study shows that HFMs in the Texas Gulf region totals ~160 million acre feet, maf (~200 km3) over the past five decades (1968 – 2017) and ~30 maf (37 km3 ) from 2015 through 2017, corresponding to ~ 2 times water use in Texas in 2016 (14 maf, 17 km3). Capturing the HMFs will not impact the state’s water right appropriations because these flows are less than the unappropriated flows simulated by Water Availability Models (WAMs) that consider appropriated water rights. The depleted Texas Gulf Coast Aquifer system is co-located with the HMFs and provides space that could store ~80% (~20 maf, 25 km3) of the recent HMFs, underscoring the potential to partially mitigate floods using aquifer storage. High plus flows and overbank flows are required to support the ecological environment. Limited analyses in the San Antonio and Brazos river basins show that capturing 65% of HMFs would not negatively impact the ecological environment in those two basins. Although these HMFs are considered very flashy, our analysis shows that ~80% of the water produced by high-flow events lasts for a week or longer, making capturing the flood water more feasible than if they occurred during shorter time periods. However, the intensity of the HMFs is still high compared to aquifer injection rates. Therefore, interim storage would be required to store the captured flood water before slowly injecting it into the subsurface. This study suggests that current surface reservoirs at a basin scale provide sufficient residual storage capacity for HMFs in the Brazos and Colorado basins; however, interim storage space would be required in the other river basins.