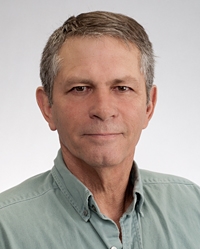 Former Bureau research associate Hardie Seay Nance died peacefully, after a long illness, on February 15, 2019, at his home in the Texas Hill Country.

Seay began his geology career in 1976 as a student assistant in the Department of Geological Sciences at The University of Texas at Austin. In 1977, he moved to the Bureau of Economic Geology, where he worked in the Well Sample Library and Sedimentology Laboratory while completing his BS (1978) and MS (1988) degrees from UT Austin. At the Bureau, he initially contributed to the Coalbed Methane, Superconducting Super Collider, and West Texas Waste Isolation projects, among others. After leaving the Bureau for a brief stint as a consulting geologist, he returned in 2001 and retired in 2014, in the meantime earning his PhD in geology in 2010.

His areas of expertise included hydrogeology, sedimentology, and stratigraphy. His late work in the subsurface Permian Basin was a capstone to his early work mapping spectacular outcrops in the Guadalupe Mountains, which provide analogs to Permian Basin reservoirs. Seay’s dedicated service to the people of Texas, mapping natural resources and educating industry geologists and state policy makers, was exemplary. He was a true state geological survey geologist and public servant.

Seay’s writing was known for its clarity and economy, traits he honed through years of practice. His first publication appeared in Sedimentary Geology in 1988. He was senior author of 18 scientific articles and technical reports, and he co-wrote 44 more. In addition to his published work, he was generous with his knowledge and time, giving more than 70 presentations of his research to university classes and groups ranging from the Geological Society of America to the (Austin) Capital Area Master Naturalists. Seay also loved to share his findings at numerous core workshops, and wrote guidebook articles for and led geology field trips.

Possessed of a creative, unconventional mind, Seay used every tool available to understand his subject, including experience in the U.S. Merchant Marine, when he observed salt flats of the Rann of Kutch. His colleagues remember him as the “utility infielder” of the Bureau—a personable, straight-talking, broad-thinking contributor to every project he worked on, unusually able and willing to do taxing physical labor when required to get data. And, when appropriate, or barely so, he could provide a refreshing diversion with his encyclopedic knowledge of 1960's TV shows. He treated everyone, regardless of job title, with respect and dignity and was quick to acknowledge essential behind-the-scenes work that supported his research.

In retirement, Seay applied his talents to three-dimensional abstract drawing, played guitar and piano, and walked along the banks of Gillum Creek through the woods of Serendipity, the land that he and wife Jean loved to call home.

H. Scott Hamlin, The University of Texas at Austin