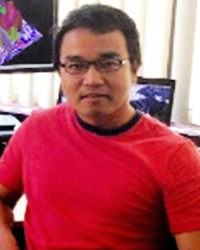 Delineating faults from seismic images is a key step for seismic structural interpretation, reservoir characterization and well placement. In conventional methods, faults are considered as seismic reflection discontinuities and are detected by calculating attributes that estimate reflection continuities or discontinuities. We consider fault detection as a binary image segmentation problem of labelling a 3D seismic image with ones on faults and zeros elsewhere. We perform an efficient image-to-image fault segmentation by using a supervised fully convolutional neural network. To train the network, we propose a workflow to automatically create 200 realistic structure models and corresponding synthetic seismic images, which are shown to be sufficient to train a good fault segmentation network. Since a fault image is highly imbalanced between zeros (non-fault) and ones (fault), we use a class-balanced binary cross-entropy loss function to adjust the imbalance so that the network is not trained or converged to predict only zeros. After training with only the synthetic datasets, the network automatically learns to calculate rich and proper features that are important for fault detection. Multiple field examples show that the neural network (trained by only synthetic datasets) can much more accurately and efficiently predict faults from 3D seismic images than the conventional methods. With a TITAN Xp GPU, the training processing takes about 2 hours and predicting faults in a 450x1950 x1200 seismic volume takes less than 3 minutes.

A detailed workflow of creating folded and faulted models will be presented.

Some results of fault interpretation are available here: https://github.com/xinwucwp/faultSeg