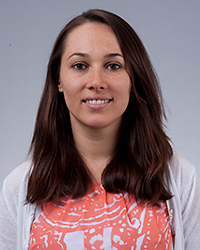 Inessa joined the Bureau of Economic Geology as a basin modeler and petroleum systems analyst in July 2018 after completing her postdoctoral research fellowship at Stanford University. Originally from Russia, Inessa received her undergraduate education in petroleum geology and geochemistry from Lomonosov Moscow State University (2009) and master’s degree from the University of Nevada, Las Vegas, as an ExxonMobil Russian Scholar (2012). She finished her PhD at Stanford in 2017, where she was affiliated with the Basin and Petroleum System Modeling Group. For all of her projects, Inessa enjoys incorporating field observations, subsurface data interpretation, and laboratory work with numerical data analysis.

I currently work on a number of basin and petroleum systems modeling and organic geochemistry projects. Much of my work currently focuses on the Permian Basin in West Texas and on the North Slope of Alaska. Basin and petroleum systems modeling combines the burial, thermal, and structural histories of sedimentary basins to model hydrocarbon maturation and subsequent migration. My organic geochemistry work focuses on a number of data types, including biomarkers, diamondoids, and compound-specific isotope analysis. Biomarkers and diamondoids conceptually can be thought of as molecular fossils in the same way as things like dinosaur bones and other macrofossils in the rock record. We use the signatures of organic molecules to reconstruct the original source of organic material preserved as hydrocarbons, as well as lithology, age, salinity, and redox conditions during deposition. This kind of work has applications to both petroleum exploration/production and paleoclimate/paleoenvironmental research.

The scale and multidisciplinary nature of my research excites me. I work with individual compounds of individual molecules all the way up to whole-basin scale. I get to synthesize a huge range of different types of data sets into a cohesive story about the evolution of sedimentary basins and petroleum systems across a number of scales, focusing on the research questions rather than on the tools used.

The desired outcome of one side of my research revolves around improving understanding of how to use and interpret data from organic material preserved in the rock record. This applies to understanding the factors controlling the deposition, distribution, accumulation, and preservation of organic matter in organic-rich mudstones for improved resource assessment. The other side of my research involves figuring out how to incorporate complex tectonic, structural, and thermal histories of a sedimentary basin into a comprehensive and realistic 3D basin model in order to evaluate if past conditions were suitable for generation, migration, and accumulation of hydrocarbons.

My recent work, which uses the Shublik Formation of the North Slope of Alaska as a case study, is a thorough core-based investigation of how lithologic heterogeneity relates to the distribution of petroleum source-rock properties, using an example in which two previously unrecognized organic facies generated genetically distinct oils. These results have significant impact on resource potential (conventional and unconventional) and the composition of expelled petroleum in producing fields. The results also show that the presence of previously unrecognized migrated fluids may have caused misleading interpretations of organic matter type and maturity in the past and that small-scale source-rock heterogeneity exerts an important control on hydrocarbon expulsion and migration. This research is particularly beneficial for evaluating Arctic resources potential, as well as for understanding the generative potential of shale resource systems worldwide.

I am interested in collaborating with researchers who are motivated by both the applied and academic sides of scientific research. Traditionally, basin modeling is done with the intention of modeling oil and gas generation and migration for a specific existing basin of interest; however, basin modeling also has many other potential applications, such as pore-pressure prediction and fluid migration across faults.

Much of my research is necessarily applied, as it deals with understanding hydrocarbon producing systems. However, many of the techniques and research fields developed to aid in hydrocarbon exploration can provide valuable insights into more academically minded earth-history questions. For example, petroleum source rocks are often shales, and by studying them we learn not only about quantity, quality, and thermal maturity of organic matter, but also about redox and productivity state, which give information on the paleoenvironment in which the shale was deposited. Using this proxy and information from biomarkers, we can reconstruct, in surprising detail, the ocean or lake that the shale was deposited in with respect to biodiversity, ocean chemistry, oxygen levels, and sometimes temperature.