How Long Did it Take to Deposit the Giant Louann Salt Layer in the Gulf of Mexico? 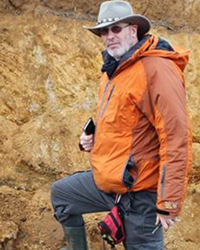 Giant salt deposits such as the Mid Jurassic Louann Salt form a vital part of the framework for oil and gas exploration. In order to explore for resources beneath and above them, we need to understand how they formed – and how long this took. But there are no modern-day analogs for this extraordinary process, so we must work this out from first principles.  By considering the very special circumstances in which the Louann formed – at the point of breakup of the Pangea supercontinent – and its links to the world ocean, we can deduce that the water entering the basin had already been concentrated by evaporation and that it probably entered the basin through a narrow channel. This makes it very different from other salt giants, such as the Messinian of the Mediterranean, which had less extreme settings. These special conditions mean that the Louann could have been deposited extremely rapidly – at rates of perhaps tens of centimeters per year –and that deposition of the entire sequence could have been completed in a matter of tens of thousands of years. Such a brief and extremely rapid deposition may be a quasi-catastrophic event in earth history, with major consequences for our understanding of the basin.