Bob Hardage and the Bureau: Leadership in 3D Seismic Research 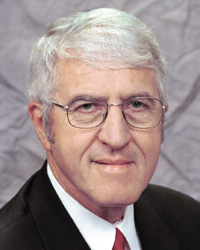 After 27 years with the Bureau of Economic Geology, preeminent geophysicist and Senior Research Scientist Bob Hardage retired at the end of January 2018. The Bureau says goodbye to a geophysics innovator.

Arrival at the Bureau

“When I arrived at the Bureau,” says Hardage, “I became the only person on staff who had experience in all areas of 3D seismic reflection seismology, and in applying 3D seismic technology in evaluations of deep reservoir targets.” Then–Bureau director Bill Fisher instructed Hardage that his primary task was to get the Bureau recognized as the place where cutting-edge 3D seismic technology was used to characterize reservoirs, just as the Bureau had already become acknowledged as the place where the cutting edge of sequence stratigraphy was applied in reservoir characterization.

Fisher went on to explain that the Bureau had no work stations, no seismic processing or interpretation software, and no budget to purchase these essential tools. “I had to start my assignment of building the Bureau into a world-class center of exploration geophysics with zero resources and zero budget,“ Hardage says.

Early donations of a workstation (from IBM, the Bureau’s neighbor to the north) and the first 3D seismic-interpretation software license (from an emerging software developer, Sierra, thanks to the persuasion of former SEG president, and Hardage friend, Robert Graebner) allowed the Bureau to start on the first of several in-house 3D seismic characterizations of gas reservoirs in a long, multi-year U.S. Department of Energy program, Secondary Gas Recovery (SGR). Says Hardage, “These SGR projects were the first research studies in which the Bureau supervised the design, contractor bidding, acquisition, processing, and interpretation of 3D seismic data. I was a one-man staff handling all of these responsibilities.”

By the early 1990s, Hardage was successful in persuading Landmark, the then-dominant developer of 3D seismic interpretation software, to donate several more software licenses to the Bureau, which also began to set aside funding for purchasing workstations. Hardage remembers some good-natured teasing about his persistence from Landmark’s then-president John Gibson. Once, says Hardage, as he approached Gibson and other Landmark executives at an SEG meeting to thank them for providing licenses, “John saw me coming, stood up, pulled his wallet from his pocket, laid it on the table, and said, ‘Hardage, what do you want now?’ John later served years on the Bureau’s Advisory Committee and has been a valuable Bureau supporter and advisor.”

The release of Stratton 3D data acquired via the first of the Bureau’s SGR projects helped gain the Bureau recognition as a leading practitioner of 3D seismic technology. Stratton was the first digital, 3D seismic dataset made available to the public; its digital database consisted of a 3D seismic data volume, a vertical seismic profile, and digitized logs from about 20 wells. The release of the data coincided with the first efforts by several entrepreneurs to develop PC-based, 3D seismic-interpretation technology. Consultants, small oil companies, and academia were intensely interested in such technology because they could not afford the expensive UNIX workstations then necessary for utilizing Landmark software nor the annual lease fees for that software.

As soon as the Stratton data went public, developers of its PC-based technology immediately got copies of the Stratton database to use in their software development. Most importantly for the Bureau, these entrepreneurs acknowledged that the Bureau provided the data that they were demonstrating, thus touting the Bureau’s early role in introducing 3D seismic interpretation into the PC world and causing a seminal change in 3D seismic interpretation that benefited the “small guy.” For the first time, the Bureau was publicly established as a key player in applying 3D seismic technology in reservoir characterization.

Throughout the 1990s, Hardage helped spread the word about the new seismic technology to the public via workshops and lecture tours. A workshop in Graham, Texas, caused a stir among operators—who had been exploring for gas reservoirs using only 2D seismic profiles—by revealing 3D seismic data that contained compelling evidence of Ellenburger karst collapse features that extended vertically about 2,000-ft above the Ellenburger and caused compartmentalization of gas reservoirs in the shallower Boonsville interval. Says Hardage, “The dramatic Ellenburger karst features revealed in this data demonstrated what was possible with 3D seismic imaging and sold 3D seismic technology as the key tool that small independents now had to use across the Fort Worth Basin to evaluate prospects.”

Bill Fisher’s goal for Bureau geophysics soon expanded beyond the boundaries of the United States with an international tour of North America, South America, Europe, and Asia that re-teamed Hardage with Landmark to showcase Bureau seismic data. Says Hardage, “This Landmark marketing tour was largely responsible for opening the eyes of the international community to the 3D seismic research center that was developing at the Bureau.”

A geophysical asset developed by the Bureau in the later 1990s has particular worldwide importance in the Bureau’s geophysical history—the 100-acre Devine Test Site on the southern border of Medina County, initially created by Sohio to develop cross-well profiling technology. After Sohio’s integration into BP, the site lay primarily fallow until Hardage approached a BP colleague and successfully recommended that the company consider donating the test site to the Bureau for public research.

The Devine Test Site is now known worldwide and is annually booked for research purposes by many U.S. and international companies. Says Hardage, “I do not think there has been any resistivity logging tool developed during the past 20 years that has not been field tested in the Devine fiberglass-cased wells. These wells are a treasure that will ensure that the Bureau’s Devine Test Site is the go-to place to develop borehole-related technology, and will establish the Bureau as the provider of arguably the world’s most valuable research field laboratory for borehole geophysics.”

What started as a scrappy undersourced seismic-research operation has come quite a long way in the 27 years of Hardage’s leadership. Today, the Bureau has over 400  computers (workstations, laptops, computer clusters) located in multiple locations in Austin, Houston, and Midland; more than 150 software licenses that support various areas of seismic research; 12 part-time or full-time research geophysicists; and approximately 20 graduate students doing seismic-related research.

“The Bureau’s present capability in seismic research and technology is rather remarkable,” says Hardage. “I have good memories of helping the Bureau undergo the transition from near-zero capability in geophysics to its present state of being at the cutting-edge of 3D seismic reflection technology. Because of my retirement from full-time research in 2018, someone else will have to take on the role of carrying the Bureau to the forefront of passive-seismic and natural-seismicity technologies that will be important future growth areas needed to evaluate, manage, and sustain our Earth’s resources.”