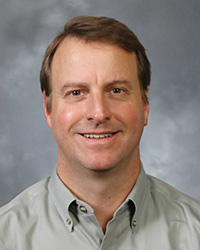 Similar to other areas of the south-central United States, the Fort Worth Basin of north-central Texas experienced an increase in the rate of seismicity between 2008 and 2016 that has been attributed to injection of wastewater in deep saline aquifers. To assess the hazard of induced seismicity in the basin under significant population centers we have integrated new data on location and character of previously known and unknown faults, stress state, and pore pressure to produce an assessment of fault slip potential that can be used to investigate prior and ongoing earthquake sequences and for development of mitigation strategies.

We have assembled data on faults in the basin from published sources, 2D and 3D seismic data, and interpretations provided from petroleum operators to yield a 3D fault model with 250 faults ranging in strike-length from 116 to 0.4 km. The faults have mostly normal geometries, all cut the disposal intervals, and most are presumed to cut into the underlying crystalline and metamorphic basement. Analysis of outcrops along the SW flank of the basin assist with geometric characterization of the fault systems. The interpretation of stress state comes from integration of wellbore image and sonic data, reservoir stimulation data, and earthquake focal mechanisms. The orientation of SHmax is generally uniform across the basin but stress style changes from being more strike-slip in the NE part of the basin to normal faulting in the SW part. With these deterministic inputs and appropriate ranges of uncertainty we assess the conditional probability that faults in our 3D model might slip via Mohr-Coulomb reactivation in response to increases in injected-related pore pressure. A key component of the analysis is constraining the uncertainties associated with each of the principal parameters. Many of the faults in the model are interpreted to be critically-stressed within reasonable ranges of uncertainty.