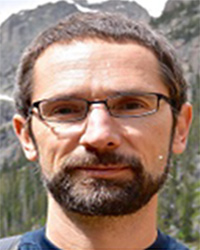 One of the long and widely held ideas about the dynamics of meandering rivers is that migration slows down in bends with higher curvatures. High-resolution measurements of local migration rates in time-lapse Landsat images from two rapidly migrating rivers in the Amazon Basin suggest that the variation of migration rate closely follows that of the local curvature, with a roughly constant phase lag between the two; and a quasi-linear relationship exists between curvature and migration rate if this lag is considered. A simple numerical model of meandering illustrates the link between curvature and migration rate and reproduces observations from the studied rivers. The implication is that meandering rivers migrate fastest at, and slightly downstream of, locations of high curvature; and one of the most important ways river migration is rejuvenated and meandering patterns are reshuffled is the generation of high-curvature bends through cutoffs. Cutoffs also result in short meander bends that are rapidly translating downstream, as the point of maximum migration falls on the downstream limb. At the same time, rapid translation of the upstream limb is favorable for counter point bar development. Although counter point bars are usually thought of as the result of confinement, we suggest that they can also form without any external forcing by banks with low erodibility. The location and definition of the counter point bars can be quantified using a ‘bar type index’, which is the product of two dimensionless signed curvatures: one that corresponds to the actual curvature, and one that is equivalent to the ratio of migration rate and erodibility. Large negative values of the bar type index are likely to represent well-developed counter point bars with low N/G deposits. This new framework for modeling and analyzing meandering rivers and their deposits is directly applicable in predicting reservoir architecture and distribution of heterogeneities.