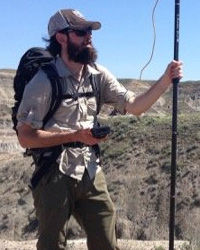 Abstract
Enhanced stratigraphic interpretations are possible when linkages between morphodynamic processes and the depositional record are resolved. Recent studies of modern and ancient meander belt deposits have emphasized morphodynamic processes that are commonly understated in the analysis of stratigraphic products, such as intra-point bar erosion and rotation, counter-point-bar (concave bank-bench) development and meander-bend abandonment. On a larger scale, longitudinal changes in meander-belt morphology and processes such as changes in meander-bend migration rate, channel-belt width/depth ratio and sinuosity have been observed as rivers enter and flow through the tidal backwater zone. However, few studies have attempted to recognize the impact of the backwater zone in the stratigraphic record. We consider ancient meander-belt deposits of the Cretaceous McMurray Formation and document linkages between morphodynamic process and their stratigraphic product to resolve more detailed paleoenvironmental interpretations.

The ancient meander belt was characterized by paleochannels that were ~600 m wide and up to 50 m deep, resolved in a particularly dense and high quality subsurface dataset consisting of 600 km2 of high-quality 3-D seismic data and over 1000 wellbores. A reconstructed paleochannel migration pattern reveals the evolutionary history of seventeen individual meander belt elements, including point bars, counter point bars and their associated abandoned channel fills. At the meander-bend scale, intra-point-bar erosion surfaces bound accretion packages characterized by unique accretion directions, internal stratigraphic architecture and lithologic properties. Erosion surfaces and punctuated bar rotation are linked to upstream changes in channel planform geometry (meander cut-offs). We provide evidence for downstream translation and development of counter-point bars that formed in response to valley-edge and intra-meander-belt confinement. At the meander-belt scale, analysis of changes in morphology over time reveal a decrease in channel-belt width/thickness ratio and sinuosity, which we attribute to the landward migration of the paleo-backwater limit due to the oncoming and overlying transgression of the Cretaceous Boreal Sea into the Western Interior Basin.