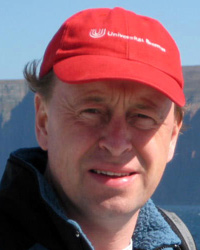 Hot, thick continental crust is susceptible to ductile flow within the middle and lower crust where quartz controls mechanical behavior. Reconstruction of subsidence in several sedimentary basins around the South China Sea, most notably the Baiyun Sag, suggest that accelerated phases of basement subsidence are associated with phases of fast erosion onshore and deposition of thick sediments offshore. Working together these two processes induce pressure gradients that drive flow of the ductile crust from offshore towards the continental interior after the end of active extension, partly reversing the flow that occurs during continental breakup. This has the effect of thinning the continental crust under super-deep basins along these continental margins after active extension has finished. This is a newly recognized form of climate-tectonic coupling, similar to that recognized in orogenic belts, especially the Himalaya. Climatically modulated surface processes, especially involving the monsoon in Southeast Asia, affects the crustal structure offshore passive margins, resulting in these “load-flow basins”. This further suggests that reorganization of continental drainage systems may also have a role in governing margin structure. If some crustal thinning occurs after the end of active extension this has implications for the thermal history of hydrocarbon-bearing basins throughout the area where application of classical models results in over predictions of heatflow based on observed accommodation space.