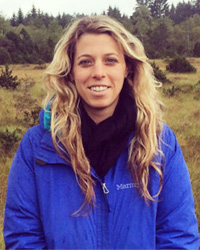 Abstract:
Severe drought in California has led to massive tree mortality across the state; Over 100 million trees have died since 2010.  However, northern California’s coastal forests and aquatic ecosystems have remained relatively unharmed despite consecutive years of limited precipitation.  In this talk, I will present results of intensive field investigations aimed at understanding how these coastal landscapes hydrologically buffer climatic extremes during drought conditions, and seasonally. Over seven years of monitoring of subsurface water storage dynamics in the mixed canopy forests of the coastal belt of the Northern California Coast Ranges reveals the importance of moisture storage in meters of fractured rock beyond the soil. This reservoir of rock moisture sustains vegetation during the prolonged dry season and regulates runoff dynamics, maintaining baseflow for salmonid populations throughout the channel network.  In the adjacent grasslands and Oak savannah of the Central belt mélange, despite receiving the same amount and pattern of annual precipitation, the channel network runs dry annually due to the small storage capacity of the thin soils. The water storage dynamics in the Coast Ranges, which regulate ecosystem function, are thus controlled by the subsurface structure resulting from the complex interplay between parent lithology and climate, tectonics, and erosion.  Here, I will share the results of modeling efforts to understand controls on subsurface water storage properties across actively eroding landscapes. Our findings underscore the utility of understanding water availability and drought resilience in the context of long term landscape evolution.