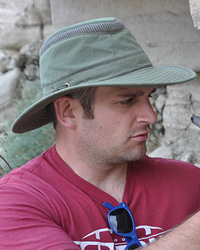 Abstract
Outcrops within the Eocene Domengine Formation (central California) provide an exceptional opportunity to observe the relationship between depositional facies and submarine mass movement. The Domengine Formation is interpreted as an assemblage of heterolithic, shallow- to marginal-marine deposits that record progradation and aggradation of the coastline prior to regional flooding and local collapse of the shelf. Structural analysis of soft-sediment folds and reverse faults within the informally named New Idria Mass-Transport Deposit (MTD) suggest transport toward the west to southwest, which is consistent with paleoflow measurements from cross-bedding within the MTD. Depositional facies have a strong influence on the character of soft-sediment deformation (e.g., style and scale of folding and faulting), and major layer-parallel detachment surfaces within and below the New Idria MTD occur where mudstone-dominated or heterolithic units underlie sandstone-dominated units. Conditions favorable to gravitational instability and eventual collapse of the shelf include 1) high sedimentation rates within a rapidly aggrading system; 2) loading of under-compacted, mechanically weak, fine-grained layers by overlying, denser sand bodies; and 3) earthquake seismicity and/or over-steepening of slopes within a tectonically active, convergent margin setting. This study provides a rare detailed glimpse into the collapse of a shelfal-deltaic stratigraphic sequence, yielding insight into the linkage between marginal marine facies and depositional architecture and the propensity for submarine mass movement.