A Jurassic Lost World Revealed; Spectacular Images of the Base of the Louann Salt Reveal a Drowned Topography

We care how giant evaporites were deposited because they tend to be formed at times of global crisis, such as extreme climate events, supercontinent breakup, oceanographic upheaval, etc. Understanding these critical times helps us to understand how the global geosystem works.

But for giant salt deposits, the present is NOT the key to the past; there is no modern analog! Past workers have used modern salt basins as analogs to these giants of the past, but they are fundamentally different in scale and process.

Some salt deposits, such as the Zechstein, contain interbedded non-salt sediment layers that can reveal the paleogeography of the salt basin and the water depth, and show how those evaporites were deposited. But the Jurassic Louann Salt of the Gulf of Mexico is different; it contains no such layers, and there has been no obvious way to investigate the basin paleogeography.

As a result, there have been many uncertainties – was the basin shallow-water, or a deep marine basin? Was it deposited slowly, over millions of years, or extremely rapidly, over thousands of years? When salt deposition ended, was an exotic tectonic subsidence mechanism required to get to the depths seen in later sediments, or was it already a deep basin?

Now, for the first time, there is hard evidence that answers some of these questions. A unique seismic data set shows, in exquisite detail, the nature of the landscape on the floor of the basin on the eve of salt deposition. The data reveals beautiful images of a semi-arid pre-salt world, with wadis and rivers draining from rugged, mountainous highlands, flowing across what is now the bottom of the basin, into a large pre- salt lake in the middle of the basin. The mid-basin lake, which we have named Lake Jackson in honor of Martin Jackson, was deep; at least 750m within our data set, probably much deeper in the middle. The pre-salt lake margin was steep, with fault scarps that were eroded above lake level, and fan-deltas deposited below lake level. Water level in the lake lay about 1km below global sea level.

Flooding of this pre-salt world was rapid, possibly catastrophic, creating the Louann Sea, a body of water several km deep. The shallow-water depositional model for the Louann is disproved.

Combined with geochemical information, we can infer a depositional model in which the salt was precipitated in deep water, with evaporation matched by seawater influx. Deposition was extremely rapid, possibly the fastest documented episode of sustained sediment deposition known to science.

With this knowledge, we can now explain the post-salt evolution of the basin, and we can begin to constrain the nature of the pre-salt sediments within the basin, which remain untested and unknown. 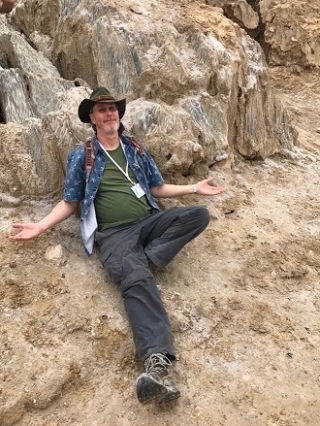