New Book Published
The EAGE has just published a book entitled "Permo-Triassic Sequence of the Arabian Plate" that contained 15 papers on various aspect of the permo-traissic Khuff Fm. One of this paper was authored Janson, Lucia, Jennings and Bellian (all current or past researchers in the RCRL) as well as several ARAMCO co-authors. The paper described an outcrop project done in 2004/2005 in collaboration with ARAMCO where a outcrop-based reservoir model was built for the uppermost part of the Khuff Fm. 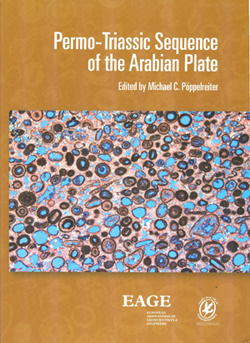 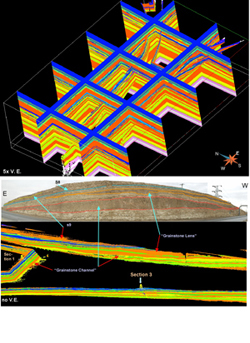 RCRL Annual Field Trip
On October 22-25, the RCRL group led its annual field trip to the Glass Mountain near Marathon, TX. The group consists of 16 geologists from sponsoring companies, 4 RCRL personnel, and 4 RCRL graduate students. The group spent 3 days visiting this new area and had an opportunity to examine syn-tectonic Wolfcampian platform deposits on the first day. The next day was spent on the spectacular south face of the Leonard Mountain looking at Wolfcampian and Leonardian slope system. On the final day, we focused on a the Guadalupian part of the section looking a sandy slope deposits, small slope mounds and massive reefal clinoforms that are time equivalent of the Goat Seep Formation in the Guadalupe Mountains. 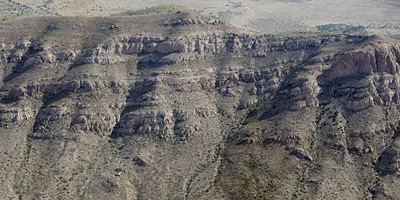 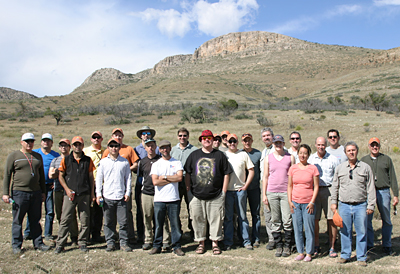 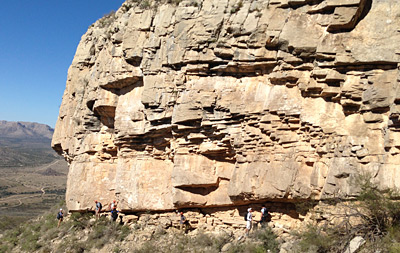 RCRL Spring Cretaceous Field Trip
23 participants from 16 companies were a part of the 2013 RCRL Spring Field Trip featuring Cretaceous carbonate systems in the Texas Hill Country and South Texas. This trip highlights past RCRL research and exposes participants to the diversity of the research program within the context of the Cretaceous of Texas. The field trip featured pinnacle reef build-ups, evaporite and carbonate karst systems, stratigraphic variability within intrashelf basins, fractures and mechanical stratigraphy, and detailed sedimentology of mudrock systems. 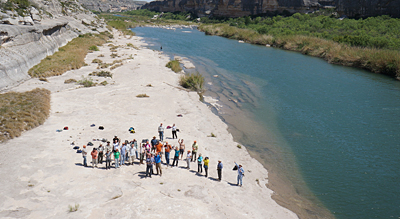 RCRL in Calgary to Discuss Karst and the Grosmont
RCRL scientists Charles Kerans, Robert Loucks, Xavier Janson and Chris Zahm along with the RCRL program coordinator Stephaine Lane visited Calgary on August 4-6 as part of an RCRL workshop on karst systems and focused on the Devonian Grosmont (estimated 400 billion barrel resource of 7 API bitumen). Twenty-five participants from 11 companies were involved in the three day workshop that featured presentations on karst outcrop and subsurface analogs and highlighted reservoir characterization efforts of large-pore carbonates. The second day featured cores from the Grosmont that spanned the Lower and Upper Grosmont through the Nisku and Upper Ireton formations. Future collaborative research on the Grosmont, including a detailed subsurface characterization study with the RCRL group and sponsor companies, will be conducted in the upcoming years. 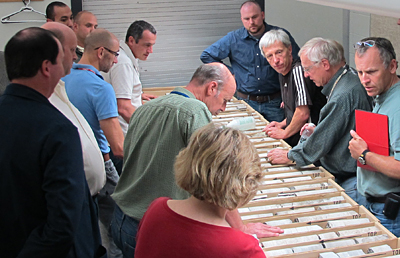