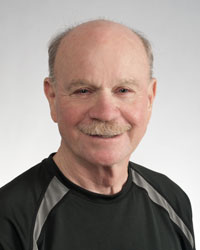 In this study our primary goal was to determine if a stable electron transparent sample could be prepared given the mineralogical complexity and inherent stored stress. In addition we wanted to demonstrate the TEM microanalysis capabilities on previously analyzed geologic samples; To use those capabilities to determine the in situ distribution and character of the organic pore networks; To characterize the mineralogical and clay micro fabric in relation to the organic component; And to characterize the organic matter texture and structure at nano scale. A selected area was prepared using FIB slice extraction technique. The slice was mounted on a TEM grid placed in a TEM for analysis. A slice of 20um x 90nm thick mudstone was analyzed. This is a silty mudstone composited of abundant Chlorite/Illite/Mica clays and silt grain of quartz and albite mixed with organic matter. Most of the pores are found in clay platelets and the organic matter and range in size from a few nano meters to microns.

**PARKING: Any visitor, without a UT Parking Permit, must obtain a PRC “Pay & Display” parking permit upon entering the campus. Please be sure to clearly display the permit on the dashboard of your vehicle. Link to maps and additional instructions: http://www.beg.utexas.edu/about/directions-and-maps.