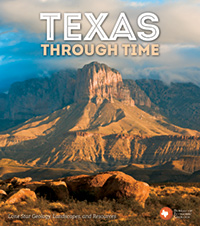 Available now at The Bureau Store

Explore the landscapes, rocks, and resources of Texas and 1.7 billion years of Earth history in Texas Through Time by noted geoscientist Thomas E. Ewing. Visit the ancient rocks of the Llano and Van Horn areas, the legacy of now-eroded Himalaya-type ranges that initially rose over 1 billion years ago. Marvel at the giant West Texas Basin, so prolific in oil and gas, and the enigmatic Marathon and Ouachita Mountains. Watch North America separate from the supercontinent Pangea and create the enclosed, salt-rich Gulf of Mexico in its wake. Discover the vast carbonate platform that today makes up the Edwards Plateau and Texas Hill Country. And witness the complex story of mountain building, uplift, and delta building that formed today's Texas landscapes. Special chapters consider Texas resources and geologic hazards, as well as the impact of geology on human settlement over the last 15,000 years. Texas Through Time contains over 500 full-color photos, illustrations, and maps, all showing the state’s development through geologic “deep time.”

Thomas E. Ewing, Ph.D., has been an earth scientist in Texas for 35 years, first with the Bureau of Economic Geology (BEG) and later as owner of Frontera Exploration Consultants and occasional lecturer at the University of Texas at San Antonio. He has given talks and led field trips across Texas for geologists and others, and his extensive publications include serving as principal author of the Tectonic Map of Texas (BEG, 1990) and writing Landscapes, Water, and Man: Geology and History in the San Antonio Area of Texas (South Texas Geological Society, 2008). Dr. Ewing has held offices in the American Association of Petroleum Geologists, as well as in local and regional geology groups, and has received several awards for his service to the field.