TexNet Research and the Center for Injection and Seismicity Research

The TexNet Seismic Observatory and the Center for Injection and Seismicity Research (CISR) at The University of Texas at Austin are multidisciplinary, trans-college research centers managed by the Bureau of Economic Geology (BEG) and are two vital parts of a whole. The overall goals of the TexNet-CISR collaborative are to collect high-quality data on earthquakes in Texas and conduct fundamental and applied research to better understand naturally occurring and potentially induced earthquakes and the associated risks. Our thoroughly integrated research program is studying the subsurface processes that may influence seismicity that will lead to better quantification of the associated hazards and risks to the citizens and infrastructure of Texas. A primary application of the data and research is to improve standards of practice resulting in the mitigation of seismicity that may stem from industrial activity. The highest priority is fact-based communication with stakeholders and rapid response to public concerns regarding seismicity.

The TexNet-CISR collaborative is funded by The State of Texas and a partnership with petroleum upstream and midstream operators. TexNet, led by Dr. Alexandros Savvaidis, is funded by the State of Texas through a budgetary line to the Bureau of Economic Geology. This funding line, most recently renewed June 1st, 2019, provides $700,000/yr to develop and operate the TexNet Seismic Observatory which streams near-real-time earthquake data to the TexNet Earthquake Catalog. The State also provides $1,000,000/yr for research on earthquakes in Texas.

The Center for Injection and Seismicity Research is led by Dr. Peter Hennings and has 22 petroleum industry sponsors as of March, 2021.  With industry sponsorship, CISR extends TexNet data development and research application to more thoroughly study earthquake occurrences, trends, and causes to improve the understanding of the intersection of natural and anthropogenic factors so that stakeholders can better mitigate induced earthquakes.  CISR research is academically independent but is closely aligned with the technical needs of the sponsoring companies.  CISR sponsors also benefit by having early and comprehensive reviews of TexNet earthquake monitoring and research progress.

The principal research goals and activities are to:

For detailed information on TexNet-CISR’s research projects please select the Research Projects link to the right.

TexNet-CISR also manages the Regional Induced Seismicity Collaborative (RISC). The state geologic surveys of Texas, Oklahoma, Kansas, New Mexico, and Arkansas, in cooperation with the U.S. Department of Energy and the Ground Water Protection Council, have formed a collaborative research project to address the issues of induced seismicity in the southern midcontinent. RISC will serve as a collaboration platform to facilitate the sharing of effective practices on seismicity monitoring and research. More information about RISC can be found in the link to the right.

The figure below shows the history of earthquakes in key areas of Texas as cataloged by the USGS. The cumulative graph shows the rate of earthquakes of magnitude of 3.0 and higher. The earthquake data shown should be considered as incomplete prior to the early 2000's when the (pre-TexNet) seismic network became effective at the regional scale.

The TexNet Earthquake Monitoring network begin cataloging earthquakes in January of 2017. Although the number of earthquakes detected and cataloged per month often exceeds 300, the vast majority of these earthquakes are very small and not felt at the surface. However, TexNet is frequently detecting somewhat larger earthquakes that are felt at the surface which need to be studied. Please follow the links at the right to access the TexNet Earthquake Catalog and to find out more information about the monitoring program.

CISR is led by Principal Investigator Dr. Peter Hennings who also serves as the geology lead for TexNet. Dr. Alexandros Savvaidis is the Manager and PI of the TexNet Seismic Observatory and is the seismology lead for CISR. 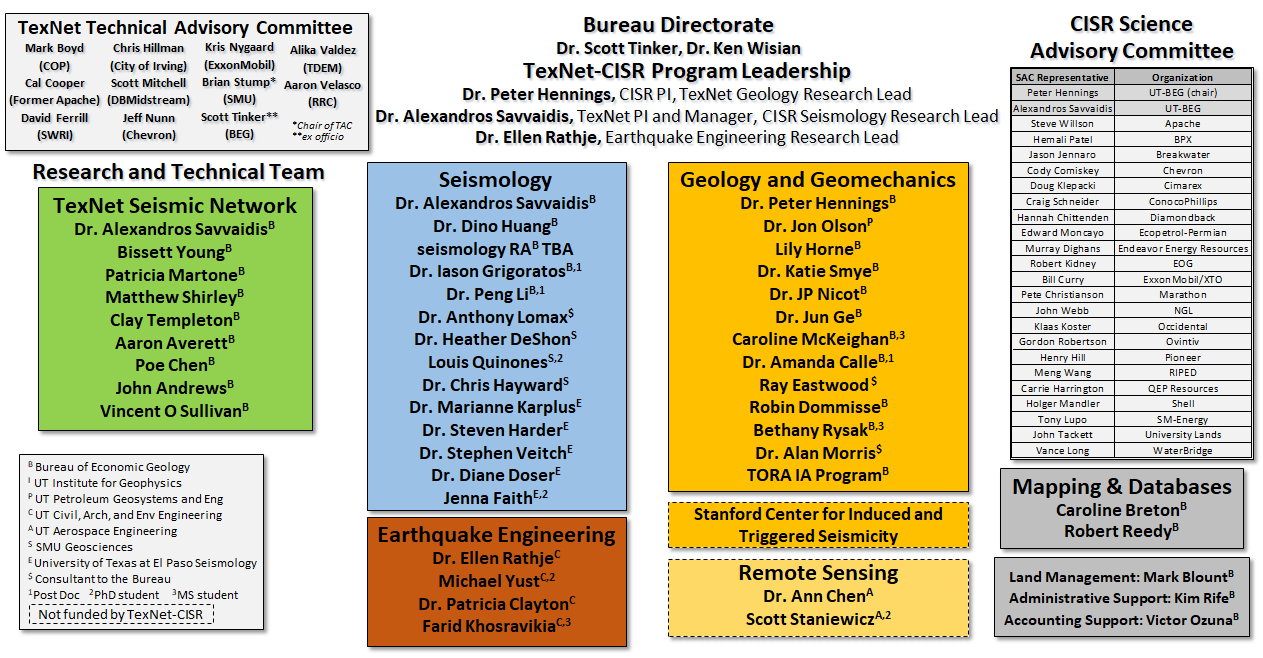 TexNet-CISR will serve the specific geography and geology of Texas, and therefore the research portfolio contains overarching themes as well as geographically-specific phases. Seismicity monitoring began state-wide in 2017 using the backbone array of TexNet seismic stations. Portable seismic stations are deployed in areas of anomalous seismicity such as DFW, northeast of Snyder, Permian Basin, and the Eagle Ford operating area of south Texas. Please visit the TexNet Seismic Observatory site for more details on monitoring.

As per the graphic below, the first geographic thrust is an integrated assessment of the seismicity history and potential of the Ft. Worth Basin and DFW area and how it might relate to oil and gas operations. This will take several years to complete ending in 2019. However, in 2017 TexNet-CISR’s efforts will begin to include other areas of Texas such as the Permian Basin region and the Eagle Ford operating area. While efforts in the DFW area come to conclusion the research team will be focusing increasing efforts in the greater Permian Basin region. 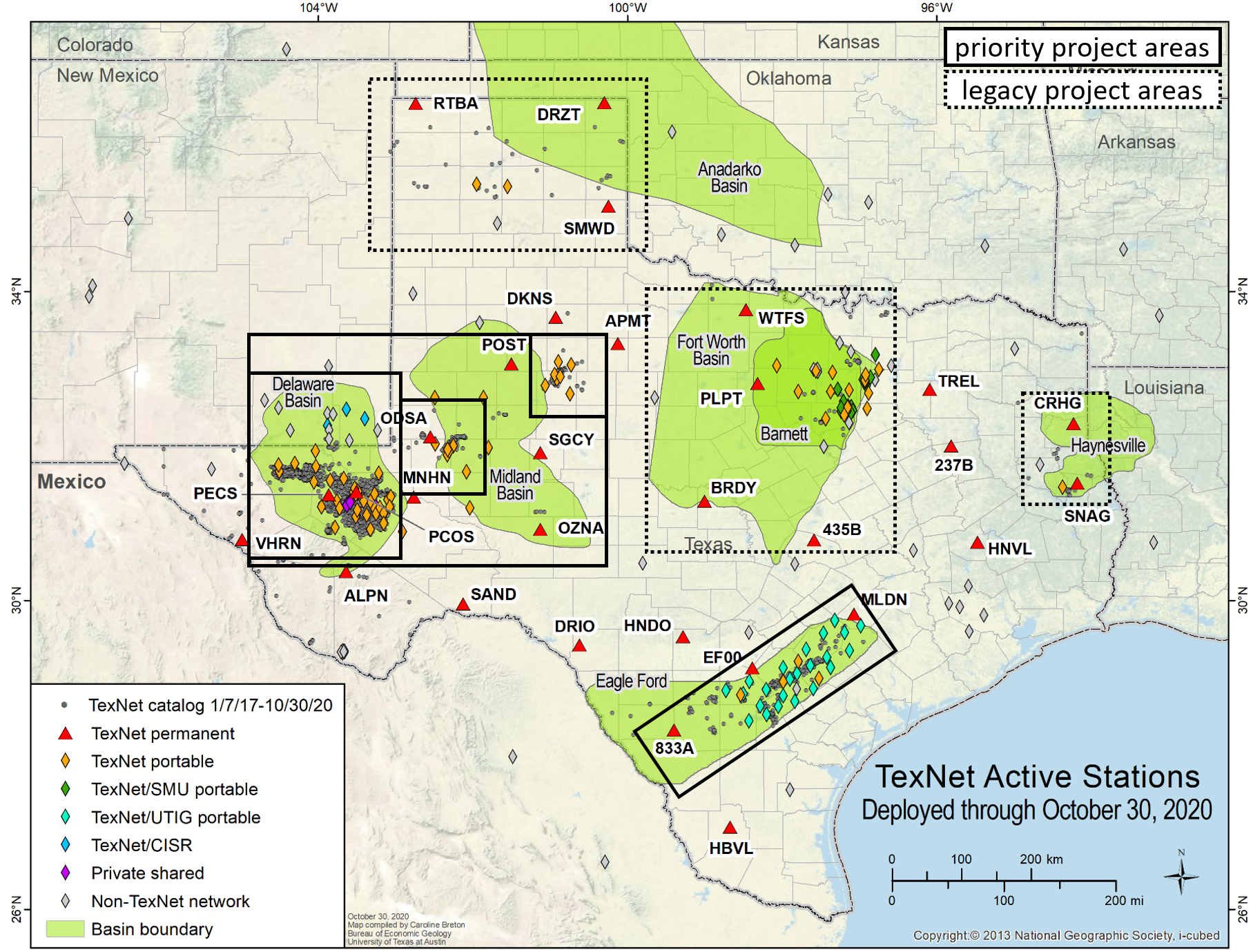 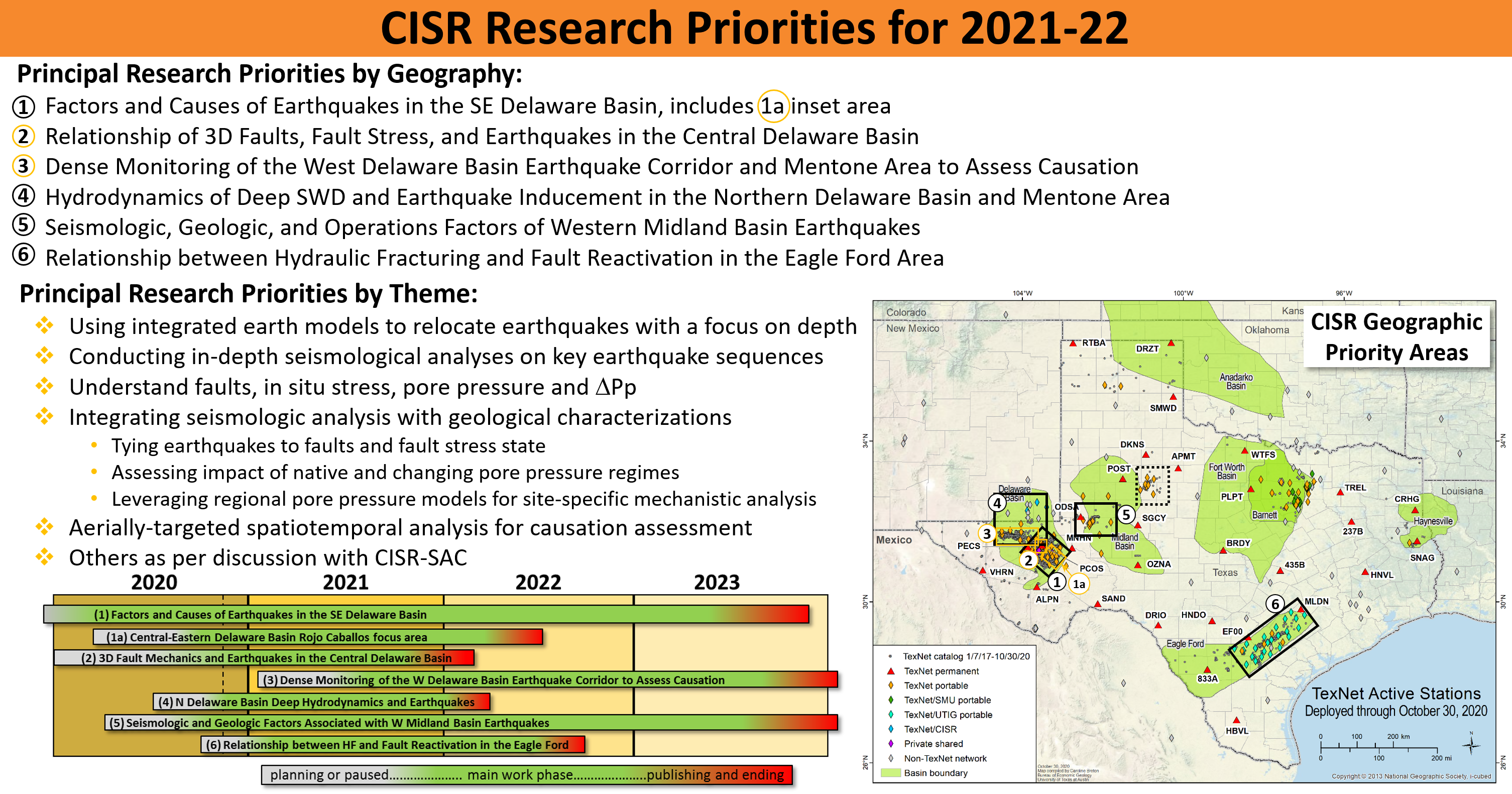