Maria Nikolinakou presented a talk “The impact of splay fault initiation and evolution on the stress state in subduction-accretion complexes” at the AGU fall meeting held in December 2020. 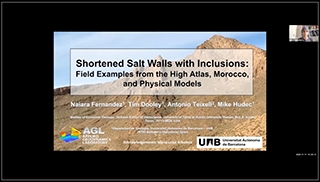 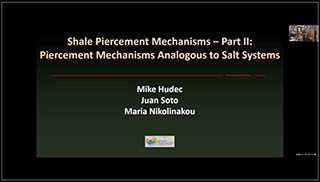 Gillian Apps gave the keynote address and was a panelist at the SEPM Deepwater research group meeting, which was held on November 5, 2020. 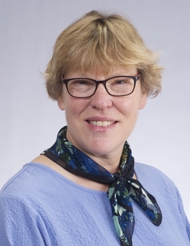 On August 18, 2020 Gillian Apps gave a virtual talk to the AAPG Salt Basins Technical Interest Group. This talk is available on You Tube, please click here for the link. Please note that the sound quality of the introduction is poor, but the talk itself is good quality.

On July 29, Mike Hudec spent several hours consulting remotely with BHP scientists, looking at data in the northern Gulf of Mexico. The discussions were provided as part of BHP’s membership in the AGL consortium.

On July 20, Mike Hudec spent several hours consulting with scientists from PEMEX and WesternGeco, looking at salt tectonics in the southern Gulf of Mexico.

On June 25, Mike Hudec spent several hours consulting remotely with BHP scientists, looking at data in the northern Gulf of Mexico. The discussions were provided as part of BHP’s membership in the AGL consortium.

Gillian Apps gave a two-part talk on June 8, 2020 for the Centre for Doctoral Training, based at Heriot Watt University. Gillian gave a technical talk titled "From mantle-driven uplift to frondescent fan fringes: a lifetime journey in deepwater". The second part of the talk was speaking on reflections of her nearly 40-year career as a woman in Geoscience and addressing the broader questions of diversity (gender, racial, cultural and economic diversity).

On May 28, 2020, Gillian Apps gave a virtual seminar at Newcastle University for the Natural and Environmental Science Community. Gillian gave a technical talk titled "From mantle-driven uplift to frondescent fan fringes: a lifetime journey in deepwater" and also spoke on her reflections of her nearly 40-year career as a woman in Geoscience.

The AGL team is excited to be continuing its research, consulting, and publishing plans for 2020. Tim Dooley has received permission to continue operating his lab, but everyone else has made the switch to working from home thanks to the expert support supplied by the BEG IT team. Here are some of the highlights of our ongoing work:

In-person visits are obviously off the table for a while, but, as a reminder, all AGL member companies are entitled to one free day of consulting each year from any of the AGL research staff. We are all also available for on-line visits and discussions upon request.

The Salt Mine is now available as a digital download!

Dr. Stanbrook with Murphy in Houston, visited the AGL offices in early March. He visited Frank Peel, Gillian Apps and PhD student Donald Christie (Southampton University) in his capacity as Donald's co-supervisor.  They discussed the forward modelling software Onlapse, which Donald is developing from Frank's early prototype. They discussed how Onlapse currently models the interplay between structural growth and sediment flux to a basin, and we touched on future applications of the software.

Mike Hudec visited Shell’s Houston office on March 10-11, to discuss salt tectonics in basins around the world. Portions of the visit were provided as part of Shell’s membership in the AGL consortium.

On March 11, 2020 Frank Peel and Gillian Apps visited the offices of Hess to discuss the Gulf of Mexico.

Mike Hudec attended a Repsol internal conference entitled “The Repsol Circum-Gulf of Mexico Workshop” in Houston on February 26-27. During the workshop, Mike gave a presentation entitled “Jurassic opening of the Gulf of Mexico, and its influence on variations in salt structures around the basin margins”.  Parts of the visit was provided as part of Repsol’s membership in the AGL consortium.

Juan Soto officially joined AGL as a full-time research scientist. Juan has begun a 5-year leave of absence from the University of Grenada to work with UT research on our new project investigating shale tectonics.